What Do You Think Of DUMBO's Colorful New Triangle?

For almost two weeks the iconic green triangle next to the Manhattan Bridge archway in DUMBO has been cordoned off, as Brooklyn artist David Ellis paints a mural over it. Throughout the first week it transformed quickly—from the first day when we thought it was getting a ketchup and mustard makeover, to new shapes and colors appearing with each passing day. But since last week it's been at a standstill, even though the triangle has remained blocked off from pedestrian traffic (can we get a "FREE THE TRIANGLE" chant?). Once the artwork (titled "PST" for Pearl Street Triangle) is sealed, the triangle will be reopened... we're told that would happen today, but this morning it was still blocked off. 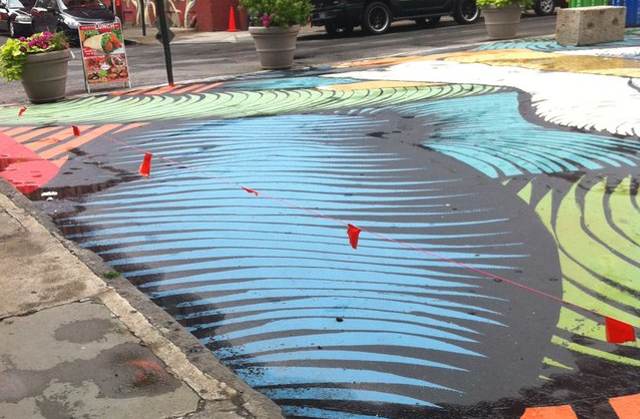 We took a quick poll in the office this morning to gauge opinions on the triangle, which sits in the shadows of Gothamist HQ, and is said to have started with a reference to the Ground Zero space, and is supposed to show how “we can pull ourselves up." Our polling results showed that 100% of men LOVE the triangle, and 100% of women do not. What does it mean?

The author of this post is also torn; there was something nice about the simplicity of the green blank canvas... and who wants to eat lunch on top of what looks like a Freddy Krueger-pulling-you-into-the-boiler-room nightmare drawn by Maurice Sendak? Fetch us our $14 Foragers sandwich!