Were There Ever Palm Trees In New York City?

There is an illustration that shows New York City right around 1770 which features a peculiar sight for these parts: a palm tree. Were there ever palm trees in New York City? 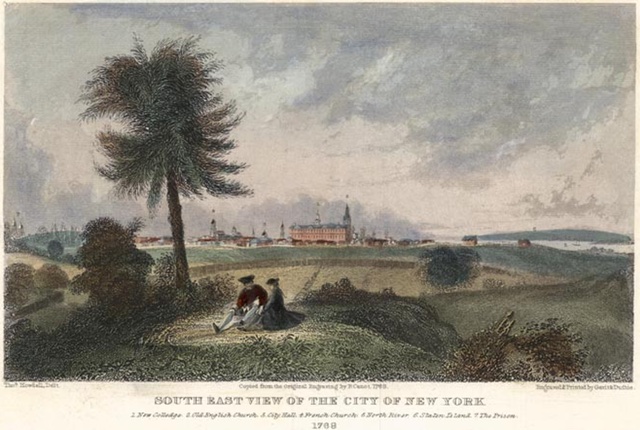 This image has been described as "the earliest view of King's College... engraved about 1768 [and] known as The Palm Tree Print."

The "Palm Tree Print" shows King's College's College Hall (later Columbia College), located near City Hall Park in Manhattan. In it, the building is shown "from afar, with what appears to be a palm tree in the foreground." Was the illustrator drunk? Taking poetic license? Why put a palm tree in an etching depicting New York City if there wasn't a palm tree there?

Or maybe this isn't New York at all, and the inscription on the bottom (which reads: "South East view of the City of New York, 1768") is a lie. Or maybe there were palm trees in New York!

We turned to the New York Botanical Garden for some answers. "Have there ever been palm trees in New York?" we asked. Their VP of Horticulture and Living Collections, Todd Forrest, believes the palm tree was just a fanciful addition by the artist.

We also reached out to the Welikia Project (née The Mannahatta Project), where they've been collecting information about the natural landscape of the area for years, going all the way back to the 1600s. Eric Sanderson, WCS Senior Conservation Ecologist, and developer of Manahatta and Welikia was familiar with the print. He told us:

Yes, it's thought that the palm tree is an artistic license. Someone told me once (or I read it somewhere, but can't remember the exact source) that it [the tree] was added by the engraver back in England to enliven the picture, which was originally drawn by a British officer, Thomas Davies, who was stationed in New York during the American Revolution. The engraver knew it was a scene from America, so added an American tree. (Remember that Europeans back then thought of America equally as a tropical place, given the colonies in the Caribbean and South America.)

So there you have it, there were never palm trees growing in New York, though they've always been popular additions to restaurant and hotel decor, and were even shipped in for the 1939 World's Fair.

#flashback
#history
#palm tree print
#palm trees
#original
Do you know the scoop? Comment below or Send us a Tip