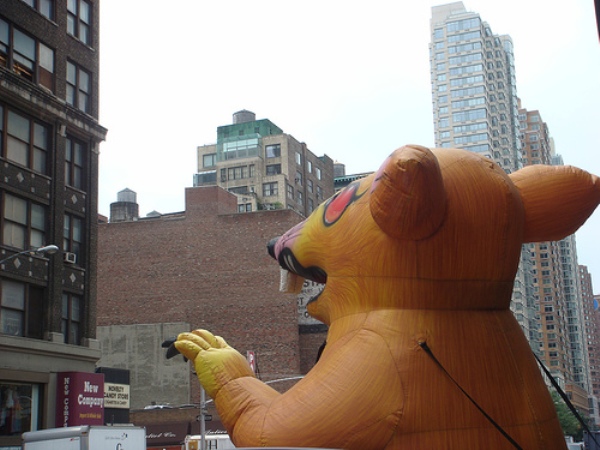 Reuters is reporting that today New York was named "the U.S. city most vulnerable to a rat attack as warmer weather and aging infrastructure fuels rodent populations across the United States." At least we don't have to worry about earthquakes (yet)?

Rodent management consultants Dale Kaukeinen and Bruce Colvin (self nicknamed the "rat pack") have determined this by assessing the rat problem in different areas. They look at 14 risks factors, including: age of infrastructure, population size, climate, and waste management.

The rodent dream team say it's impossible to determine how many rats are living amongst us, but they confirm that the urban myth that there are six rats to every human in New York is in fact a myth. Still, the reality isn't very good, they deliver the down n' dirty facts:

"But we know that a female rat can have a litter every three weeks of 10 to 12 young, so even with mortalities you probably get 50 new rats a year from one female," he said.

"If half of those are female you can see that if you have a garbage strike the rat population will explode. Cities are so vulnerable and need to give this priority."

Others cities in the Top 10: Houston, Boston, Philly, Washington, DC and Chicago. In Denver cases of the bubonic plague have even been reported! The study is meant to urge cities to take a pro-active approach against rats. Hear that Peter Luger? But we doubt this problem will end until there's a world without New Yorkers (according to Alan Weisman they'd never survive without our heated buildings and garbage)!