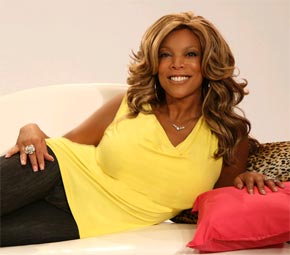 Wendy Williams has been on the radio waves for 22 years--15 year of them in NYC--currently hosting the number one Wendy Williams Experience on WBLS, she's also written two New York Times bestsellers, and had a VH1 show called Wendy Williams is on Fire. Now she has launched a six-week "sneak peek" of her TV talk show, The Wendy Williams Show.

The show made a splash when former Apprentice contest-villain Omarosa made a stir (see the clip) fighting on-air with Williams, and prompting the NY Times' Alessandra Stanley to write, "At long last a breakthrough in daytime programming: the backtalk show." We spoke to Williams recently to ask her about the new show as well as how she can not only dish it out but she can take it as well.

How has the new talk show been so far? I'm sorry, there's a cop riding by. [Background--man says, "How are you doing?" Williams responds to him:] I'm doing fine, thank you, officer. [Officer asks, "How's the show going?"] Good! [Some muffled conversation, then the officer says, "All right, take care."] Thank you, bye-bye!

So, is that the kind of reception you get every day--people just stopping you, asking you how you're doing? Yes! [Laughs] I was doubled parked at the sidewalk, I thought he was going to pull up and give me a ticket and instead he sees me and says, "How you doing?" He said he watches the show, so I'm doing good... I'm sorry - I missed your original question. What was it?

No problem--how has your talk show been so far? Oh my God--amazing. Amazing, surreal, an out-of-body experience, yet I feel very, very calm and very poised and very deserving of everything that's happening to me with my career. I've been working very hard.

How do you feel about the reaction to your talk show? For instance, The Soup plays clips of your show and makes fun of you. How do you feel about that kind of teasing? I love it. I've dreamt about this attention. Are you kidding me? I've dreamt about this, and now that it's here, I am loving it! It's Friday--I can't wait to watch The Soup, Best Week Ever, and see if they say anything. And if they don't--I'm like, "Oh, my God--I gotta do something!"

So who has been your your favorite guest so far? Oh, man, all of them. Every last one of them.

Even Omarosa? Well, Omarosa was certainly very entertaining. She certainly did bring a value to my show that I couldn't have asked for if I just relied on my self. Certainly none of my other guests, you know, like Vivica Fox, Regina King, Ice Cube, Rocco DiSpirito, nobody has given me such combative behavior...which did get the show a lot of attention.

Omarosa thought she was doing something really negative for me, and what she really did was do something very positive because what she did was she showed people, that this girl they thought was a loose cannon from NJ--that would be me--really is not as bad as she's made out to be. She held her tongue, she let Omarosa speak, she took it like a champ and then she moved on.

And certainly there are many ways I could have handled that...people say, why didn't you cut her off, why didn't you go word for word, why didn't you curse her out...but it's not that kind of show. It's not Jerry Springer. It's a lovely place to be, to learn a little something, go with people you like, learn a little something you didn't know before, learn something about a favorite celebrity...and then you go about your day. It's not a place to be angry and combative. So Omarosa was trying to pull a number but the number got pulled on her.

Right, if anything, it probably drew more eyeballs to her show. That's right. Thank you, Omarosa.

In your both your radio and TV shows, you like to dish about different celebrities, and some celebrities have gotten upset with you. How do you deal with that kind of reaction? There's no way with dealing with it. I find that I can say things about celebrities--virtually the same type of things that Michael Musto or Cindy Adams might say--but because I'm on the radio, maybe more reachable than the others...and Cindy Adams has decades on me in terms what she's been doing...I have no idea. You take one celebrity, say, for example, Diana Ross. Musto, Adams and I talk about her, and Diana Ross ends up being the most angry with me. I think it's more of a problem with the celebrities and how they perceive the things that are said about them than it is about the actual sayer. Don't blame me--I'm not making things up. I'm too busy to be looking in the windows of celebrities. I get my information the same way the others do--we talk to people, people call us...and we read the Internet and the tabloids.

What Internet sites and tabloids do you read for gossip? Well, I like TMZ like everyone else does. I like Media Take Out. I'm a columnist for Life & Style magazine, so certainly I read them. I enjoy the Star, the Enquirer, the Globe--are you kidding me? I love them all.

I take bits and pieces from everybody. And here and there, I do get telephone calls from people directly--bartenders, hotel housekeepers, car service people. I get in a taxi and the taxi driver might take me 8 blocks and in 8 blocks, he might tell about this celebrity who was in the cab last week and what happened. In this day and age, it seems like everybody is in the inner circle, including my mother and father who are retired in Miami--they're contributors to the show!

Did you complete your film, The Queen of All Media, where Robin Givens is portraying you? That wrapped in the September of 2007, but then one month later, we got the call about the interest in doing a TV show. So it's been less than a year--and my husband and I financed and produced it independently with Guardian Pictures--and we're waiting now to hear what happens with the talk show and then go in full throttle to get the movie distributed and put in theaters.

So it's all turning out really well. If the TV show gets picked up and goes nationwide, we'll sit on the movie for a couple months and wait for the buzz on the TV show to bubble, because that might draw more people into the movie theater who want to find out about this woman named Wendy.

When are you going to find whether the show is picked up nationally? Oh, man, we only have two more weeks. Four weeks down, two weeks to go. So it's some time between now and when we say good-bye on August 26.

So, what are you trying to tell people who are just learning about you through your TV show? Well--and I do realize that I've been one of New York's best-kept secrets for many years now--there's a lot of the country to canvas. What I would like them to understand is that I'm a simple woman from NJ and I've just been blessed with a microphone and a vehicle.

You know, I am all about woman power first and foremost. It hurts me the most to know that no matter how we as women feel that we're doing , getting along, doing well, getting raises, we're still only making approximately 75 cents to every man's dollar. It's very disheartening. I know [I've experienced that] in my past situations. Regarding women power, we've got to start earning our money, we've got to start getting respect, and we need to take care of ourselves... We're so busy, struggling with being good daughters and wives and mothers, getting ourselves educated, trying to make our way in the world, we're often the last ones we check on.

The world is a tough place...I want my talk show to be a place of fun and great engagement with one another for one hour day. To me, that's just great. We touch on politics, but it's not a political show. We touch on a variety of things, but most of all, I just want it to be an oasis.

Well, I wish you the best of luck. Thank you! I'm sitting outside the radio station now, so I'm about to go up and do my other job!

The limited engagement of The Wendy Williams Show is on MyFoxNY at 10 a.m. and other Fox affiliates in LA, Dallas and Detroit. She can be heard on WBLS from 2 p.m. to 7 p.m. every day.