Welcome To The "Secret" Wild Riverside Forest In Queens Over the weekend, an invite-only event was held at the totally overgrown Hunter's Point South section of Queens. This was all part of Nate Kensinger's "Chance Ecologies" project, and featuring an architectural dig, kite mapping, canoe trips, a radio listening party, explorations of ghost streets, and a lot of exploring the wild landscape. Below, photographer Nate Dorr reports back. 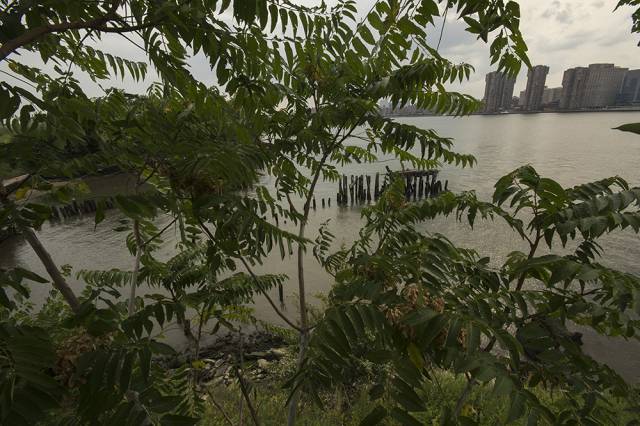 Just across the East River from the United Nations and other midtown edifices, there's an unplanned riverside forest in Long Island City, Queens. This is the furthest southwest point of the neighborhood, tucked between the river and the mouth of the Newtown Creek. Here, the old industrial L.I.C., the Hunter's Point South condo towers, and Gantry Plaza State Park all simultaneously collapse into wasteland.

The spot once hosted the Jack Frost Sugar Refinery, at the time the largest in the world, amongst a series of other industrial tenants. Cleared in the early '00s to make way residential units, it fell into development limbo for a decade. Over that time, the forest which had already found a foothold on the fringe of concrete debris at the river's edge has moved inland, and plants have crept over much of the site, turning it into a refuge for local dog walkers and other visitors. But not for long—the site is slated for immediate redevelopment into both a new round of condos and a southern extension of Gantry Plaza State Park.

And so, this summer, the wilderness became the staging ground for "Chance Ecologies," a collaborative project designed to explore the possibilities of such undeveloped landscapes. The project was organized by journalist Stephen Zacks, photographer and filmmaker Nathan Kensinger, and artist Catherine Grau, and wrapped up last Sunday, though it's essentially open-ended: as long as the vacant lot is there, anyone can turn it to their own uses. 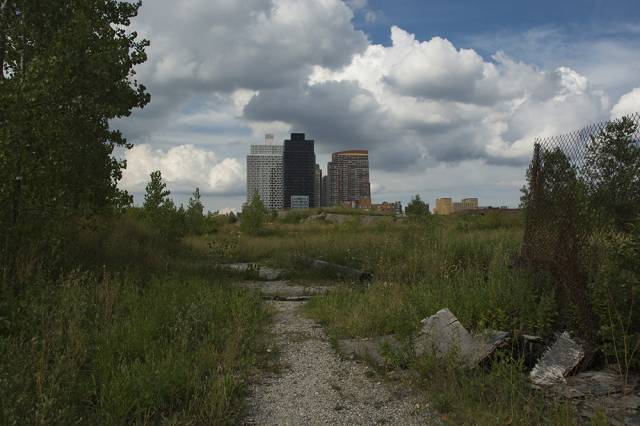 The last formal events, however, included an impromptu archeological dig along the phantom contours of long-vanished Dock Street, a kite-mapping project, a pirate radio station broadcast from within the site, a picnic along the rusted and graffitied ruins of the old Pidgeon Street float bridge, a visit from the North Brooklyn Boat Club, and a walking tour of the original contours of the site, when it was a tidal island surrounded by marshland in the early 19th century.

#chance ecologies
#Hunter's Point South
#nate dorr
#nate Kensinger
#queens
#original
Do you know the scoop? Comment below or Send us a Tip