This is the one of several dispatches from Cuba by Gothamist's Lauren Evans and photographer Tod Seelie.

You will not find Hershey, Cuba on a map, but I assure you that it is there. Its official name, these days, is "Camilo Cienfuegos," not to be confused with the Other Cienfuegos on Cuba's southern coast. Locals, though, still refer to it as "Air-say," despite having been scrubbed of its original moniker once relations with America collapsed in 1961.

Hershey? Like the chocolate? Yes, like the chocolate. In 1916, World War I was in full swing, as was the notion that mass-produced products would shrink the gap between rich and poor by making luxury goods attainable to the unwashed masses. It was during this year that Milton Hershey visited Cuba for the first time and, noting its abundant sugar plantations, decided to set up his refinery some 30 miles outside of Havana, near the town of Santa Cruz.

In addition to the state-of-the-art refinery, Hershey also took pains to ensure that his workers would enjoy model American lives. Along with identical tract homes, he also erected a cinema, baseball diamond, golf course, and social club. An electric railroad was built to transport supplies between Hershey and the ports of Havana and Matanzas. It's the only one of its kind on the island, and it still runs today.

Hershey died in 1945, leaving his executives with instructions to sell his Cuban holdings. The refinery and town wound up in the hands of Cuba's premiere sugar magnate at the time, Julio Lobo. In 1959, it was nationalized by Fidel Castro, along with everything else. 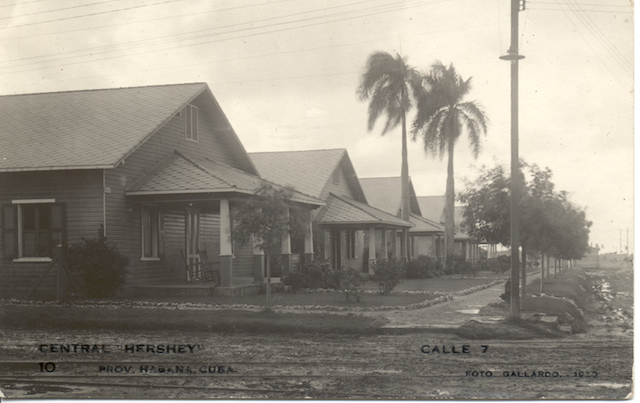 The passage of time is visible in Hershey's dilapidated storefronts and crumbling factory, which ceased operation in 2003. But the fabric of the neighborhood remains largely the same—and it's unlike anyplace else you'll see in Cuba.

Clapboard houses are uniformly outfitted with front porches and tiny front lawns, separated by sidewalks still peeking through the overgrowth. The paved streets are lined with gutters, formed by perfectly cut curbs, spaced exactly 100 feet apart. It's unsettling, in a way—something as familiar (and at least to me, inherently disquieting) as an American suburb, dropped in the middle of the Caribbean.

Cuba has long since had its way with Hershey—the houses are no longer their sensible Pennsylvania brown, but bright turquoise. Horses munch the long grasses in unkempt front yards. One former flagstone building features a truck parked on its second story balcony. The mill's picked-over carcass remains, the Cuban government having only recently announced that it would begin the process of clearing it away, maybe.

The day I went was blistering hot, the nearby ocean offering only the faintest whisper of a breeze. A group of middle-aged men congregated in what passes for Hershey's main square, chatting and drinking under the shade of the sprawling palm fronds. But aside from the occasional passing horse or bicycle, the town was still. The cinema shuttered long ago; a school has been built atop the golf course. What was everyone still doing here?

Juan Carlos González, 64, was doing the same thing as everyone else: Lounging on his screened in porch, taking in the neighborhood. González never worked in the sugar factory, but his father did, and so did his grandfather, who helped build the electric rail before going to work in the refinery.

Hershey, he said, was originally built as a batey, technically defined as a "sugar worker's town." Since then, its population had gradually expanded to nearly 1,000. He remembers Hershey chocolate being sold in stores, long before the dread Special Period settled over the country in 1989. "At that time, the sugar from here was considered the best refined sugar in the world, so they produced a lot of it," González told me. Coca-Cola was its largest client.

Hershey was ostensibly a corporate idyll for its workers; in reality, it was terribly segregated. Black and white workers were given separate living quarters, and Chinese workers were charged with doing everyone's laundry, González said. Social clubs were separated too, though white women would often sneak over to the black social club, he added with a wry smile. Single male workers were fated to live alone in stone dormitories, now home to families of squatters.

As it turns out, González is a master rum taster for Havana Club, produced in a factory in Santa Cruz. He brought out heavy pours of the stuff to share, and there we sat, sipping Cuban rum in an American suburb on a hot May afternoon.

I asked González whether Hershey feels especially American. "No," he replied. "It's been too many years—maybe in the '40s and '50s." Still, he said, "it doesn't take an architect to see that it's different from everywhere else."

Want to visit Hershey? There are a few ways to get there, but catching a ride on the awesomely creaky electric rail is probably your best bet. It leaves from the Casablanca train station just outside the city at the woefully inconvenient times of 4:45 a.m., 12:20 p.m. and 4:35 p.m., and costs 1.40 CUC for foreigners. Detailed information is available here, but be sure to check with the concierge at a fancy hotel for current info on whether its running or not.

#cuba evans
#gothamist getaways
#hershey
#hershey cuba
#longform
#original
Do you know the scoop? Comment below or Send us a Tip