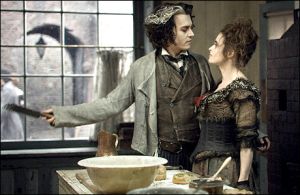 Prestige filmmakers take note: If you want the Times critics to really love you, what you need to do is put the fear in them. At least it worked for Tim Burton; his adaptation of Steven Sondheim’s Sweeney Todd gave reviewer A.O. Scott nightmares. And for that, Scott deems the film “close to a masterpiece, a work of extreme – I am tempted to say evil – genius.” (Current Rotten Tomato rating: 88% fresh.) One big question was whether the non-singing actors cast in the film would be able to pull it off; according to Burton the film is almost 90 sung. Well, it worked for Scott:

Johnny Depp’s voice is harsh and thin, but amazingly forceful. He brings the unpolished urgency of rock ’n’ roll to an idiom accustomed to more refinement., and in doing so awakens the violence of Mr. Sondheim’s lyrics and melodies. 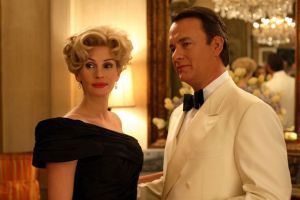 Scott also has big praise for another major opener this weekend, Charlie Wilson’s War, starring Tom Hanks, Philip Seymour Hoffman and Julia Roberts. Directed by Mike Nichols, the film is adapted from a bestselling book about the Cold War Great Game played out between the U.S. and the Soviets in Afghanistan. Using Pakistan as a middle-man to flood the country with weapons and dollars, the U.S. gave the Soviets’ their own Vietnam, while simultaneously cultivating a fanatical mujahideen that would ultimately blow back on 9/11. Oops! Nichols’s film tells the story of how Democratic Congressman Charlie Wilson used his influence on the Defense Appropriations subcommittee to greatly increase covert funding for the mujahideen, while boozing and chasing a lot of tail along the way. (Wilson’s cocaine binges are politely left out.) Scott says the flick is fun, funny and “the best politically themed movie to come around in a while.” (It’s currently 80% fresh.) 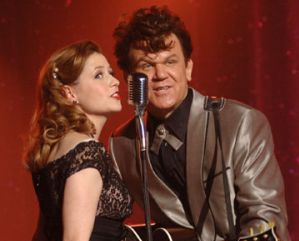 The other big studio premiere this weekend is the Walk the Line parody Walk Hard, written by Judd Apatow and starring John C. Reilly. Riffing on Joaquin Phoenix’s impersonation of Johnny Cash and biopic clichés in general, Reilly portrays the rise and fall and rise again of singer-songwriter-opportunist Dewey Cox. The Times’s Manohla Dargis finds the movie “surprisingly flat… more funny ha-ha than LOL; it’s a smarty-pants satire that mocks and embraces almost every cliché in the biography playbook… Part of the problem is that it sticks so close to the films that inspired it that it actually echoes some of their flaws.” (81% fresh so far.)