Swing Vote, anyone? You know, starring Kevin Costner as an “apathetic, beer-slinging, lovable loser, who is coasting through a life that has passed him by, until his daughter sets off a chain of events which culminates in the election coming down to one vote: her dad’s!” HAHAHA! Take it away, Boston Globe: “Swing Vote is a satire that's afraid to satirize. It's predicated on so many forces of incompetence converging in a single spot that it feels like farce for dummies. Why are we still microwaving Frank Capra's old casseroles?”

But if Swing Vote's sold out, there’s always that Elliott Gould (friend of Gothamist) retrospective at BAM starting today. Called “Star for an Uptight Age,” the series centers on Gould’s golden era when he was an unlikely matinee idol and leader of what critic J. Hoberman (another friend of Gothamist) called “Hollywood’s Jew Wave.” The Bensonhurst native tells the Times, “For an awkward audience that didn’t necessarily understand the order of things, I would perhaps say I was someone to identify with.” The series starts tonight with Robert Altman’s M*A*S*H, continuing through the 21st. 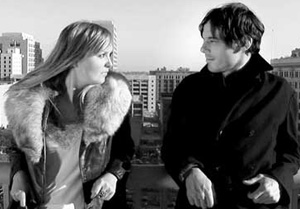 Also opening this weekend is the no-budget indie romantic comedy In Search of a Midnight Kiss, about two would-be lovers fumbling through a New Year’s Eve blind date in sunny L.A. The Observer’s Andrew Sarris says it “overcomes patches of overwriting to end up as a film well worth watching… And Robert Murphy expertly photographed the somber ruins of a once vital downtown Los Angeles with many dazzlingly varied perspectives.”

And Frozen River is a somber movie set in upstate New York that dives into illegal immigration, ethnic tension, depressed real estate, high gas prices and dire poverty. The Times’s Stephen Holden likes it because “it evokes a perfect storm of present-day woes.” Even more depressing is the third Brendan Fraser "Mummy" movie opening this weekend (Rolling Stone: “The new Mummy is, how can I put it? Just freakin' awful.”) Your weekend midnight movies are Mel Gibson’s Road Warrior at the Sunshine and at IFC there’s Riot on Sunset Strip, the hilariously awful 1967 film about dirty hippy gang rapists.