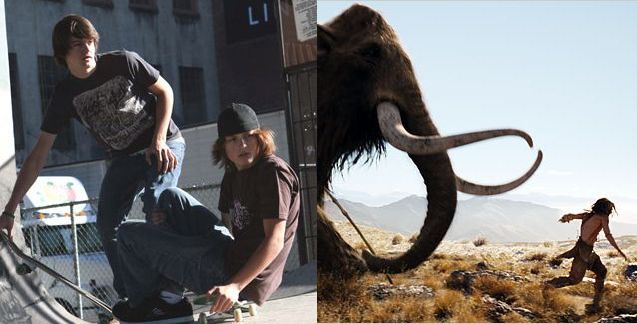 A train hopping skate boarder gets blood on his deck after fending off a brutal rail yard security guard in Gus Van Sant’s moody Paranoid Park. In her rhapsodic Times review, Manohla Dargis swoons over Van Sant’s “use of different film speeds and jump cuts, and his tendency to underscore his own storytelling" in the Portland, Oregon-set film. But Van Sant fan Jeffrey Wells calls it “meandering and even dreary… nowhere near as striking or stylistically distinguished as Van Sant's Elephant and Last Days.”

The Arizona Daily Star's Phil Villarreal has his fun reviewing 10,000 B.C., the pre-historic spectacle directed by Roland Emmerich (Independence Day): “With the right mindset you can appreciate it as a fairly effective comedy. The beasts look more true-to-life than the people, in fact. And are mostly better actors.” Times critic A.O. Scott gets in his jabs too: “The wooden acting, the bad dialogue, the extravagantly illogical special effects may well, in time, look pleasingly cheap and hokey, at which point the true entertainment value of the film will at last be realized.” But 10,000 B.C. does feature flesh-eating swamp ostriches, so who cares what those snobs think. 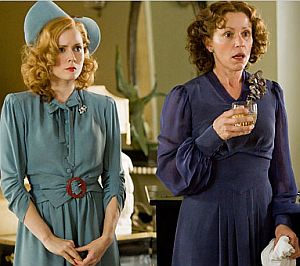 Miss Pettigrew Lives for a Day stars everyone's favorite Francis McDormand as the lonely “social secretary” to Delysia Lafosse (Amy Adams), an American actress making the rounds in London high society, circa 1939. Taking place in a single day, the Times’s Stephen Holden calls the cheery confection “an example of how a little nothing of a story can be inflated into a little something of a movie with perfect casting, dexterous tonal manipulation and an astute eye and ear for detail.”

There is also Blindsight, a documentary about blind Tibetan teenagers determined to climb a 23,000-foot peak near Everest, which opened this week at the IFC Center. The Voice says the climbing scenes are the “least compelling aspect” but Blindsight is nevertheless “a deft and humanistic treatment of blindness in Tibet,” where many blind children are shunned by their parents, who think they're possessed by demons.

#000 B.C.
#10%
#Blindsight
#Miss Pettigrew Lives for a Day
#movies
#openings
#Paranoid Park
#review
Do you know the scoop? Comment below or Send us a Tip