In what's arguably the boldest movie title of the year, Harold & Kumar Escape From Guantanamo Bay finds our White Castle-craving heroes sucked into a madness far greater than any encountered in their first amusing adventure: the war on terror, which is even crazier than a doped up Neal Patrick Harris. Thankfully, NPH is back for their latest romp, in which they're mistaken for terrorists while doing bong rips on the flight to Amsterdam. The Times's A.O. Scott says, "The simple fact that a movie exists with the title Harold & Kumar Escape From Guantanamo Bay is cause for hope. Or maybe for alarm. In any case, for a few laughs."

On the flip side of that same coin is Standard Operating Procedure, Errol Morris's provocative examination of the untold story of the Abu Ghraib scandal (we saw it last night at the Tribeca Film Festival). We found it riveting, but the Village Voice's J. Hoberman thinks Morris's use of evocative imagery is a crutch to divert "attention from the banality of his inquiry." 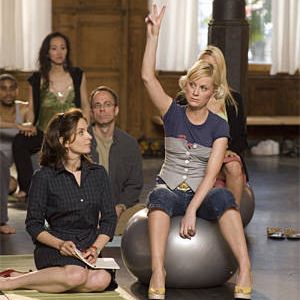 Also opening this weekend is Baby Mama, the Tina Fey and Amy Poehler flick in which Fey, the responsible professional, enlists the wild and crazy Poehler to carry her child. It seems the laughs are as artificial as the insemination, at least according to Robert Wilonsky at the Voice, who calls it "a Saturday Night Live sketch stretched a good hour past its breaking point of no return." But he says Steve Martin, as Fey's NBC executive boss, "hasn't been so deadpan or dead-on in ages; he steals the show from the sidelines."

Tonight Film Forum screens Bernardo Bertolucci's Last Tango in Paris, which offers "a last glimpse of Brando before he walled himself up in a pyramid of flesh," according to J. Hoberman. Tomorrow night is Kiss Me Deadly, the hard boiled noir classic by director Robert Aldrich, double-billed with '50s boxing thriller 99 River Street.

And Bomb It, a documentary about the international graffiti scene that traces the movement back to paintings by Picasso, screens at Cinema Village. Variety calls Bomb It an "entertaining, high-energy survey that touches on myriad related topics, from the appropriation of graffiti imagery in corporate advertising to the addictive thrill experienced by those who still go at it guerrilla-style."

#baby mama
#Bomb It
#Harold and Kumar Escape from Guantanamo Bay
#Standard Operating Procedure
Do you know the scoop? Comment below or Send us a Tip