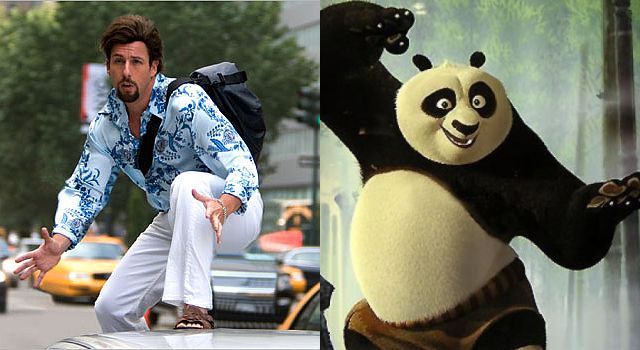 In You Don’t Mess With the Zohan, Adam Sandler affects an Israeli accent to play a Mossad commando turned sex-crazed NYC hairdresser. The script, co-written by Judd Apatow, Robert Smigel and Sandler, works hard to coax laughs out of the Israeli-Palestinian conflict, throwing in plenty of gross-out humor and comic stylings from Rob Schneider, who plays a dumb Palestinian. Need further discouragement? Variety’s Brian Lowry calls it Schneider’s “most relentlessly unfunny appearance under heavy makeup since his uncredited role in Chuck & Larry as an Asian wedding coordinator.” (More reviews here.)

This weekend’s other big studio diversion is the animated DreamWorks feature Kung Fu Panda, with Jack Black voicing a black sheep panda who refuses to settle for a hum-drum life of bamboo munching and embarks on a quest to be a kung fu champion. The Times’s Manohla Dargis concedes that the formulaic flick “has the consistency of baby pablum,” but, surprisingly, it somehow wins her over: “So consistently diverting and visually arresting that it succeeds in transcending its storybook clichés.” 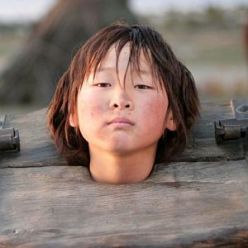 Mongol, the epic biopic from Russian filmmaker Sergei Bodrov, covers Genghis Khan’s life from boyhood to the eve of world domination in 1206. It conquers the heart of Times critic A.O. Scott, who calls this first film in a planned trilogy “authentically raw and refreshingly archaic, and also strangely beautiful… It is, among other things, a stubborn defense of old-fashioned, grand-scale moviemaking.”

In 2004, Liev Schreiber saw MTV footage of a 25-year-old Baghdad film student declaring his dream to be a Hollywood filmmaker. So Schreiber gave the kid a gopher job on the set of Everything is Illuminated, which he was directing in the Czech Republic, and arranged for Nina Davenport, a Harvard chum, to document his noblesse oblige. Things went mostly to hell along Schreiber's well-paved road, and the resulting documentary, Operation Filmmaker, comically “maps a contagion of mutual exploitation that seems to have burnished the careers of everyone involved,” according to J. Hoberman’s favorable review.

There is also The Promotion, a comedy about two mid-level Chicago supermarket employees competing for a coveted managerial post, starring John C. Reilly and Seann William Scott (American Pie). Reviews are mixed, with The Hollywood Reporter imploring the international community to “add watching The Promotion to the Geneva Convention's list of humanitarian abuses.” The midnight movie at the Sunshine this weekend is the 1971 thriller Klute, starring Jane Fonda, Donald Sutherland and Roy Scheider, and Film Forum begins a one week screening of the 1967 screwball political satire The President’s Analysist, starring James Coburn as the titular shrink.

#Klute
#Kung Fu Panda
#Mongol
#movie
#opening
#review
#The President's Analyst
#The Promotion
#weekend
#You Don’t Mess With the Zohan
Do you know the scoop? Comment below or Send us a Tip
A new Gothamist is coming! We’ve moved comments over to our beta site. Click here to join the conversation and get a preview of our new website.