In Splinter (tag line: "It will get under your skin"), a young couple heads off for a romantic camping weekend, and you know what happens next. Flesh eating porcupine monsters attack! And they spend the bulk of the flick hiding in an abandoned gas station. The Times's A.O. Scott admires its "grisly absurdism" and adds, "Even though the characters conform to every expected stereotype, the acting is reasonably convincing. And the monsters travel light, unburdened by allegorical baggage. What are they supposed to be? I don’t know. Just really gross and scary, I think." 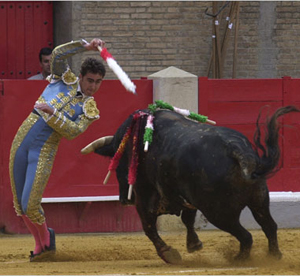 Matador is a documentary about a bullfighter determined to become one of the few matadors in history to complete 100 corridas in a single year. Elena Oumano at the Voice digs it: "The filmmakers' keen journalistic eye picks out the details that matter, those that speak of the love shared by the Fandila family and of how heavily their expectations weigh on the matador's young shoulders. The Matador reserves judgment while raising the core issue concerning this traditional ritual: deep, poetic cultural expression or glorified animal cruelty?"

Israeli director Amos Gitai's film One Day You'll Understand concerns a French businessman in the late '80s who is shocked to uncover the truth about his family's conduct during the Nazi occupation. The Observer's Andrew Sarris says, "The casting of 80-year-old Jeanne Moreau, that eternally winsome temptress of cinema, provides much of the raison d’être for the project. It is only the latest manifestation of the deep respect the French cinema has always shown for its aging actresses and actors."

Cult B-movie legend Bruce Campbell spoofs himself in My Name Is Bruce; the Voice says"the only things missing from this unfunny Campbell love fest are a passable script, Sam Raimi's inventiveness, and a level of sophistication beyond nose-picking and ass grabs."Film Forum is screening Rosemary's Baby for one week; the Voice has an article. The Sunshine has Nightmare on Elm Street at midnight this weekend and IFC Center screens Twilight Zone: The Movie.