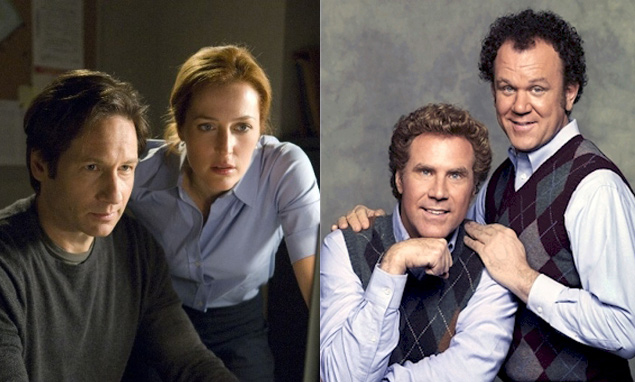 Compared to the hype that surrounded the first film adaptation, this second X-Files movie is opening almost discreetly this weekend. Is the studio’s subdued promotional effort a sign that I Want to Believe is a mess, or is Space Chimps just sucking all the air out of the room? The Times’s Manohla Dargis says, “I wanted to believe. But with his big-screen blowup of his great and weird television series The X-Files, Chris Carter has turned me into a reluctant skeptic. Baggy, draggy, oddly timed and strangely off the mark.” Amy Biancolli at the Houston Chronicle is even more succinct: “The truth is, they're boring now.”

In Step Brothers, Will Ferrell and John C. Reilly reunite to play two adult slackers content to mooch off their respectively single parents until they marry, forcing the deadbeats to share a bedroom. The Post’s Kyle Smith says, “Before the blessed light of Step Brothers entered my life, I knew not the sweet comedic splendors of live burial.” Smith's colleague at the Daily News writes, “Watching people act like kids is annoying. Now everyone can join in the un-fun with Step Brothers.” Who to believe? Let’s split the difference with Kurt Loder, who calls it“a movie so stupid, so primordially mindless, you can feel a lifetime's worth of higher ed and hard-won refinement leaking out of your ears as you watch it. I couldn't stop laughing at the damn thing.” 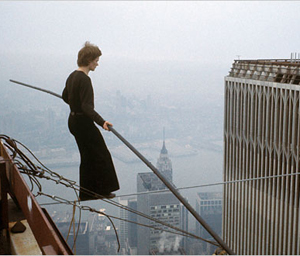 Man On Wire, on the other hand, has critics raving. The documentary about Philippe Petit’s famously illegal tightrope walk between the World Trade Center towers in 1974 is "exhilarating" according to the Village Voice. "Ultimately, Man on Wire memorializes a New York of almost lackadaisical looseness—a place where security breaches end in magically fanciful outcomes... where the Port Authority bestows upon this daredevil scofflaw not a ticket to Gitmo, but a lifetime pass to the World Trade Center's observation deck.” Read our interview with Petit, who will answer questions after screenings at the Sunshine theater tonight and tomorrow.

Also opening this weekend is American Teen, a documentary that looks unflinchingly at the senior year of high school in rural Indiana through the eyes of six students. You might think a movie about teen angst would be, like, totally irritating, but we saw this when it screened at BAM and found it an affecting, from-the-hip depiction of the hell that is other students. Director Nanette Burstein gets unbelievable access to these kids’ lives, and thanks to the excellent sound and production values, the flashback feels remarkably intimate. The Times’s A.O. Scott writes, “Once we know a little about how these kids think, interact and behave, we are caught between the hunger to know everything and the impulse to look away before we learn too much.”

The midnight movies this weekend are Dick Tracy, starring Madonna and Warren Beatty, at the Sunshine, and at the IFC Center there's Wild in the Streets, a 1968 film with Richard Pryor and Shelley Winters that tells the story of a rebellious teen who becomes a rock star and then president of the U.S., at which point he sends the old people to live in retirement homes where they’re force-fed LSD.