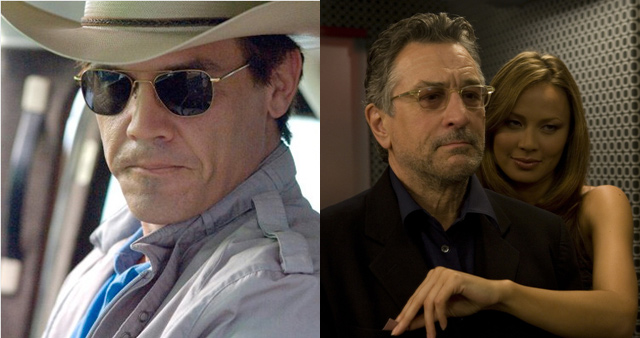 Oliver Stone's latest president biopic W. opens today, and stars Josh Brolin as 43, Richard Dreyfuss as Vice and Thandie Newton as Condoleezza. Ornery Armond White at the New York Press calls it "the best example of American filmmaking courage since Munich." Then again, here's a man who thinks that "for the past eight years, the media elite have fought back against Bush." Right! The press sure gave Bush hell when the administration was ramping up for Iraq, didn't they? Anyway, Jeffrey Wells at Hollywood Elsewhere, no Neocon, says it's "one of the most startling and surprising films of the year. The damn movie leaves you feeling sorry for this fucker at the finale, and that ain't hay."

Dark comedy What Just Happenedfeatures Robert De Niro as a middle-aged Hollywood producer whose life and projects are falling apart. A.O. Scott at the Times trashes it with glee: "The title of Barry Levinson’s new movie, What Just Happened, is not phrased as a question, but if it were it would demand another question in response: 'Who cares?' I’m asking in earnest. Who, exactly, do Mr. Levinson and the screenwriter, Art Linson, expect to invest time and interest — to say nothing of thought or feeling — in this meandering, passive-aggressive comedy of Hollywood inconsequence?" 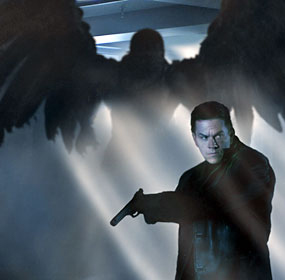 Since most Hollywood action movies are looking increasingly like video games, why not make more video games into movies? The latest is Max Payne, and we must admit the commercial we saw last night during The Office looked bad ass. But according to Hollywood and Fine, it's just plain bad: "Based on a third-person shooter videogame, Max Payne is a nap-inducing special-effects fest, minus even the excitement of watching someone else play a game."

There's also The Secret Life of Bees, starring Dakota Fanning as a 14-year-old runaway who flees her abusive father and is taken in by beekeeping sisters in South Carolina, played by Queen Latifah and Alicia Keys. Ella Taylor at the Village Voice is mildly entertained, but notes that "only near the end does this likable but saccharine movie fleetingly complicate the Gone With the Wind–fed delusion that the love of poor, black nannies for their white charges was undiluted by bitterness. Is that Hattie McDaniel I hear, whooping for joy from beyond the grave?"

Did you know Madonna directed a movie? It's called Filth and Wisdom, and it stars Eugene Hutz (Gogol Bordello) as a Ukrainian musician who pays the bills by slapping around submissive Londoners and dressing up in women’s clothing. Manohla Dargis at the Times says "it does keep you interested from scene to scene, which is a more generous compliment than it might seem." And Sex Drive, a teen comedy about Josh Zuckerman's road trip to lose his virginity to a woman he met online, sounds like torture. Las Vegas Weekly says, "It may be a mistake to ask too much from our teen sex comedies, but Sex Drive can’t even live up to the lowest expectations of the genre."

Film Forum is screening the 1955 big-budget French extravaganza Lola Montès, which Andrew Sarris at the Observer calls "sheer ecstasy." And your midnight movies this weekend are a fabulous sing-along screening of Evita at the Sunshine and The Shining at IFC Center.