Tropic Thunder – an action/comedy lampoon of a Vietnam action movie gone awry – would seem worth the price of admission just to see Robert Downey, Jr. in blackface, but Robert Wilonsky's Village Voice slam does give one pause: "When it isn't tossing softballs at the studios, Tropic Thunder is the very thing it parodies: a wall of noise engulfed in flame... Stiller is back in the send-up business, nibbling gently at the soft, manicured hands that feed him... It's just another so-so Ben Stiller movie, this time with Robert Downey Jr. in blackface, which you'd think would be enough, but it's not." Netflix?

Woody Allen's Vicky Cristina Barcelona concerns a love triangle between Cristina (Scarlett Johansson), an artsy American on vacation in Barcelona, Vicky (Rebecca Hall), her studious best friend working on her master's thesis, and Juan Antonio (Javier Bardem), the sybaritic painter who seduces both. The Sun says the film "may be the least abstract of Mr. Allen's more recent efforts, and the least yoked to the filmmaker's signature affectations. In its best moments, when Mr. Bardem and Ms. Cruz lay siege to the screen, reveling in their fever-bed chemistry, it's as if Mr. Allen has stumbled into an alternate universe — one where his movies are actually worth watching again." 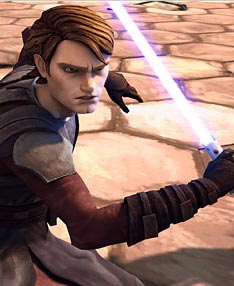 And then, God help us, there is The Clone Wars, a new animated installment in the Star Wars franchise; this one set between Episodes II and III, before Anakin succumbs to the dark side. The Times's Nathan Lee was shocked to find that "it isn’t the most painful movie of the year." He adds that the movie "completes the franchise’s divorce from photography-based cinema, as well as from any relationship to credible human feeling." Harry Knowles (Ain't It Cool News) published a scathing review on behalf of all the betrayed fan-boys that Lucasfilm made him remove; it's back up now.

There is also Anita O’Day: The Life of a Jazz Singer, which Stephen Holden calls a "fast-paced, enthralling" documentary, and the New York premiere of Never Apologize: A Personal Visit With Lindsay Anderson, which features actor Malcolm McDowell rhapsodizing about the dissident director who boosted his career big time with If... The Voice has an interview with McDowell here. And Manohla Dargis at the Times loves A Girl Cut in Two, Claude Chabrol's "erotically charged, beautifully directed story of a woman preyed upon by different men and her own warring desires."

Your midnight movies this weekend are 54 (about the famed nightclub) at the Sunshine and at IFC there's Psych-Out, the 1968 psychedelic rock movie with Jack Nicholson and Dean Stockwell that's set in San Francisco but mostly shot in L.A. with music by (yuck) L.A. bands.

#best
#movie
#new
#opening
#premiere
#review
#tropic thunder
Do you know the scoop? Comment below or Send us a Tip