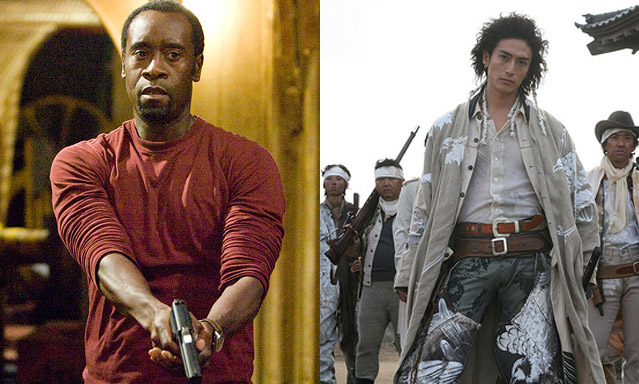 Don Cheadle and Guy Pearce star in Traitor, a terrorist thriller conceived by Steve Martin that the Village Voice calls "uneven yet engrossing." In it, Cheadle plays an American-born mercenary who at age nine witnessed his Sudanese Muslim father die in a car bombing. When the flick finds him as an adult, he's seemingly gone from U.S. Special Ops to selling explosives to jihadists, with Pearce as the FBI agent on his tail. The Voice says, "Cheadle is stiff and self-conscious here... and he isn't helped by the spy-novel goofiness of the terrorist's final plan."

Sukiyaki Western Django opens in New York today; A.O. Scott at the Times calls it "a feast for genre fetishists, a loving and lurid pastiche of the spaghetti westerns that were themselves lurid pastiches of classic Hollywood cowboy pictures." The movie features a Japanese cast portraying a stylized version of the Old West, and pastiche-master himself Quentin Tarantino disemboweling a snake in the opening scene. It's also, sprach Scott, "a grindingly violent film. That the violence is often treated as sanguinary slapstick is not a problem in itself; turning mayhem into a joke is an expected feature of the self-conscious genre-blending formula." 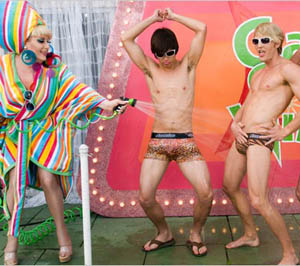 There is also Another Gay Sequel: Gays Gone Wild! the follow-up to Another Gay Movie. It's recommended here merely as an excuse to point you to Nathan Lee's scathing review: "Don’t let the title fool you: there’s nothing generic about Another Gay Sequel: Gays Gone Wild!... this wretched gaysploitation number is, in fact, the worst gay sequel ever." Not wretched is I Served the King of England, a picaresque Czech epic that starts in the nineteen-thirties and continues through the Nazi occupation and the Communist period. The New Yorker's David Denby calls it"graceful and leisurely."

There's also Year of the Fish, an animated Cinderella story about an abused Chinese immigrant and her magical fish. The preview looked too precious by half, and Vadim Rizov at the Village Voice confirms our suspicion: "Year of the Fish is the kind of really bad movie it takes a lot of misplaced conviction to make." Elsewhere in the Voice you'll find a good primer for the four day John Carpenter series at BAM that starts Monday. And your weekend midnight movies are Tron at the Sunshine and the documentary Mondo Hollywood, about the cultural scene in Hollywood in the late 60s, at IFC.