Charlie Kaufman's directorial debut; the ambitious, surreal and expansive Synecdoche, New York, stars Philip Seymour Hoffman as a regional theater director who moves to NYC from Schenectady after his wife Adele (Catherine Keener) leaves him. Using money from a MacArthur fellowship, Caden rents a huge warehouse and spends the next decades directing a never-finished theatrical epic based on his life. Manohla Dargis at the Times loved it (ditto Gothamist): "It’s extravagantly conceptual but also tethered to the here and now, which is why, for all its flights of fancy, worlds within worlds and agonies upon agonies, it comes down hard for living in the world with real, breathing, embracing bodies pressed against other bodies." And here's our interview with Kaufman.

Clint Eastwood’s Changeling is based on the true story of Christine Collins (Angelina Jolie), a single mother whose young son disappeared in 1928 and was returned six months later—except she swore it was the wrong boy and challenged the corrupt police captain, who put her in a mental hospital. The Village Voice's J. Hoberman calls it a "two-fisted snake-pit weepie...Jolie doesn't perform in Changeling; she resolutely presents herself to the audience for admiration...Jolie is most convincing in her demand for recognition—and Eastwood is glad to oblige...One needn't be clairvoyant to know that somewhere in Hollywood, someone is imagining her acceptance speech." 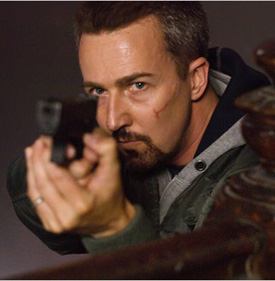 Edward Norton's new vehicle, a corrupt-cop drama called Pride and Glory, is being roundly panned. Kyle Smith at the Post: "When the writers went to the Dialogue Store, it must have been closed because they loaded their cart from whatever they found in the Dumpster out back. Can one movie really contain all of these lines? Not just "I'm doing what I have to do"...but also "I'm right in the middle of something I don't know how to get out of." The Washington Post: "There's a special circle of hell with the filmmakers' names on it for a scene involving Farrell, a baby and an ironing board."

In I’ve Loved You So Long, Kristin Scott Thomas plays a woman recently released from prison after a 15 year sentence for murdering her 6-year-old son; the drama concerns her relationship with her younger sister after she moves in with her and her family. Andrew Sarris at the Observer says French director Philippe Claudel has "made a grown-up film for our troubled time, and created a beautiful rapport between two gifted actresses. I recommend this film especially for the discerning moviegoer."

OMFG, if you've got terrible karma or you just lost a bet, you might find yourself at High School Musical 3: Senior Year which Kyle Smith describes as taking "a long, long time between the musical numbers, which themselves are at the level of a Mentos commercial." As an alternative, Brian Miller at the Voice recommends Ben X: "The best movie I've seen about teen angst since Donnie Darko comes from Belgium? It's also the best film about a bullied teen with Asperger's Syndrome that I've seen from any country, and its blurred life-into-vidgame fantasy sequences makes it seem doubly topical."

Your midnight movies this weekend are Monty Python and the Holy Grail at the Sunshine and IFC Center is screening Creepshow, directed by George A. Romero from Stephen King's 1982 homage to Eisenhower-era gothic comics like Tales From The Crypt.

#changling
#charlie kaufman
#movie
#new
#opening
#review
#synecdoche
Do you know the scoop? Comment below or Send us a Tip