In Role Models, Paul Rudd and Seann William Scott play bad-boy salesmen who travel to schools pushing an energy drink called Minotaur. When Rudd's character over-imbibes and totals the company truck, they're forced to do court-ordered community service in a mentoring program for troubled youth. Hilarious hi-jinks ensue? Not so much, says Joe Morgenstern at the Wall Street Journal: "This furiously raunchy, occasionally bright and eventually benumbing comedy...is a prototypical summer release dropped into early November...At one point in its development, the film was called Mentors, but the marketing people may have worried that the target audience wouldn't know what mentors do."

Soul Men, directed by Malcolm D. Lee (whose credits include blaxploitation farce Undercover Brother), stars the late Bernie Mac and Samuel L. Jackson as two-thirds of a 1960s soul trio whose lead singer long went on to be a star. When the famous frontman dies, the two remaining members try to bury the hatchet and travel to New York for a memorial gig. Salon's Stephanie Zacharek writes, "The only good reason to see the otherwise dismal comedy Soul Men is to have a look at Bernie Mac in one of his final screen roles... Mac could always deliver a line in a way that seemed laid-back and casual. But he knew how to sharpen the edges of his gags just slightly—his unwillingness to suffer bullshit was always part of his charm." 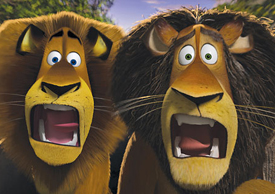 The spirit of Bernie Mac also lives on in Madagascar: Escape 2 Africa, which features the voices of David Schwimmer, Ben Stiller, Chris Rock, Alec Baldwin and others in a rehash of the hit move about animals escaping from New York captivity. Nancy Churnin at the Dallas Morning News says, "It's bad enough when sequels repeat the plot of their original movie. But it's serious chutzpah when the sequel cribs key plot points of another movie, as Madagascar: Escape 2 Africa does with The Lion King... The disappointment is all the greater because the 2005 Madagascar was so refreshingly witty and original."

Otto; Or, Up With Dead People is about an imagined radical gay zombie culture in Berlin, where the living dead are finally accepted by society, despite a growing “plague” of homosexual undead. The Times's Nathan Lee says it's "sexy and silly in just the right proportions, a cult item with a real heart — albeit one that tends to get torn from the rib cage and munched on by naked men conversant in the philosophy of Herbert Marcuse." And Repo! The Genetic Opera is based on a campy sci-fi/horror musical directed by Darren Lynn Bousman, who's done some Saw flicks. J. Hoberman at the Village Voice calls it "a movie of wildly enthusiastic Grand Guignol gross-outs. The whole gaudy miasma reaches its climax with the entire cast converging on the local opera house, West Side Story–style. ('Tonight, tonight, we'll be at the opera tonight—it's gonna be a bloodbath—toni-i-i-i-ght!')"

There's also the documentary Pray the Devil Back to Hell, about brave female activists in Liberia. Manohla Dargis at the Times deems it "uplifting, disheartening, inspiring, enraging — the mind reels while watching...even as the eyes water, the temples pound and the body trembles." Your midnight movies this week are the annoyingly overrated Donnie Darko at the Sunshine and An American Werewolf in London at the IFC Center.