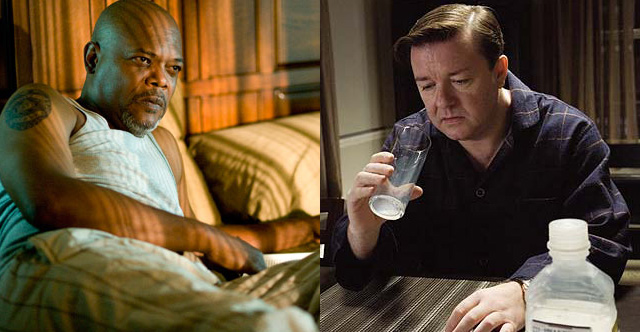 Samuel L. Jackson—who, as Anthony Lane at the New Yorker notes, is about to turn 60—stars in Lakeview Terrace, a suburban noir featuring Jackson as an L.A. cop and single dad who cannot stand the liberal mixed-race couple next door. It's directed but not written by Neil LaBute, though Lane thinks "it sounds a lot like him, in the lethal simmer of its conversation...It’s a shame, then, that the later stages of Lakeview Terrace should overheat and spill into silliness... The first hour of the film, however, with Jackson in command, feels dangerous, necessary, and rife with comic disturbance. Just like the man himself."A.O. Scott at the Times hates the movie, calling it "glib...Bernie Mac did more with the topic in a few throwaway moments of the lamebrain comedy Guess Who than Mr. Jackson manages in all of Lakeview Terrace."

Ricky Gervais, Tea Leoni and Greg Kinnear star in the romantic comedy Ghost Town, which features Gervais playing a man who dies for seven minutes and comes back to life with the ability to see ghosts, who then incessantly pester him to pass messages to their loved ones. It's getting good reviews; Roger Ebert calls it "a lightweight rom-com elevated by its performances...Why do I think Ricky Gervais is so funny in Ghost Town? Because he doesn't want to appear funny. He wants to appear aggravated." 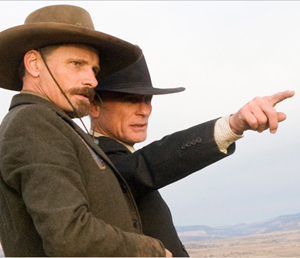 Directed by Ed Harris and based on a novel by Robert B. Parker, Appaloosa stars Viggo Mortensen and Harris as two lawman up against a murderous landowner (Jeremy Irons) in the New Mexico territory. A.O. Scott writes that "the movie’s tolerant, good-humored view of its characters drains it of some dramatic intensity, but Mr. Harris seems more interested in piquant, offhand moments than in big, straining confrontations. One important gunfight goes by so quickly and anticlimactically that even Everett remarks on how fast it was over. 'That’s because the folks knew how to shoot,' Virgil says."

There's also Keira Knightly as the infamous 18th-century socialite Georgiana Spencer Cavendish, Duchess of Devonshire in The Duchess. Rex Reed at the Observer does not approve: "In true and dubious movie fashion, The Duchess transforms a serious, carefully researched biography of historical significance into a bucket of frothy banality overwhelmed by wigs, costumes, gilt-edged ceilings, sumptuous country manors and expensive period furniture as imagined by Sofia Coppola. It looks like outtakes from the nauseating bubble-gum fantasy Marie Antoinette."

And then there's Battle in Seattle, which stars Woody Harrelson and Charlize Theron in a fictionalized account of the 1999 demonstrations in Seattle against the World Trade Organization. The Times's Stephen Holden observes that "a drama is only as convincing as its characters. The people awkwardly forced together in Battle in Seattle are rhetorical mouthpieces tied to the sketchy plotlines of a so-so Hollywood ensemble movie. As in the much better written but equally schematic Crash, you can hear the machinery grind and squeak as the scales are balanced."

Your midnight movies this weekend are Midnight Meat Train, a serial killer flick, at the Sunshine, and 1967's The Cool One, in which "a go-go dancer is packaged for TV stardom," at IFC.

#appaloosa
#ghost town
#lakeview terrace
#movies
#new
#opening
Do you know the scoop? Comment below or Send us a Tip