This year’s Fourth of July blockbuster, Hancock, opens today. The quasi-comedy stars Will Smith as an angry homeless man with superhuman powers who causes massive property damage whenever he clumsily tries to save the day. The media has it in for him, but after he (tragically) rescues a publicist from an oncoming train, the grateful flack (Jason Batemen) helps him with an image makeover. The Times’s Manohla Dargis, of all people, calls it an “unexpectedly satisfying and kinky addition to Hollywood’s superhero chronicles.”

Perhaps the most fitting July 4th premiere is Gonzo, a new documentary about Hunter S. Thompson, who once wrote, "In a nation of frightened dullards, there is always a sorry shortage of outlaws." Director Alex Gibney (Taxi to the Dark Side) focuses on Thompson’s best years in the ’60s and early ’70s, before he “became the sum of his trademarks – the sunglasses, cigarette holder and inchoate rage – and ended up imprisoned by them,” as the Times put it. The Voice has a mixed review, decrying Gibney's “glib simplification” and music montages; Hollywood Elsewhere also wonders “what prevented Gibney, an extremely smart guy, from realizing that it's virtually impossible for a person watching a doc about the social upheavals of the '60s to listen to the Youngbloods singing ‘Let's Get Together’ without wanting to fire a bullet into his or her right temple?” 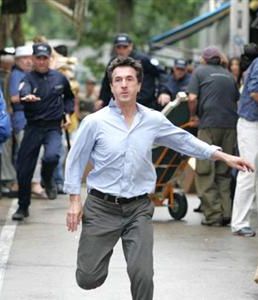 Opening today is Tell No One, an award-winning French thriller (adapted from an American mystery novel) about a Paris pediatrician (François Cluzet) who, eight years after the brutal murder of his wife (Marie-Josée Croze), gets an e-mailed video purporting to show her alive. The Voice’s Ella Taylor says that “the love story at the movie's heart is flat” but the film's “many delights” are “an atmospheric volatility that sets off the doctor's blooming paranoia against his sunlit, leafy surroundings, and a terrific cast that includes Kristin Scott Thomas as a bitchy lesbian with heart.”

Also opening this weekend is The Wackness, a period piece set in mid-‘90s New York that features Sir Ben Kingsley as a bong-ripping psychiatrist who trades his services for weed, delivered by the movie’s main character, a pot-dealing high schooler with ennui to spare. Rolling Stone says that “for all its wicked delights and tasty acting, The Wackness hangs back when you most want it to sting.” The Times has a profile on director Jonathan Levine; here’s the opening scene.

And the exciting Japan Cuts festival of new Japanese cinema kicks off tonight with Naomi Kawase’s Mourning Forest (Q&A with the filmmaker to follow) and continues through July 13th. Your midnight movies this weekend are Jodorowsky’s The Holy Mountain at the IFC Center and, at the Sunshine, The NeverEnding Story. (Sorry if you just got songed.)