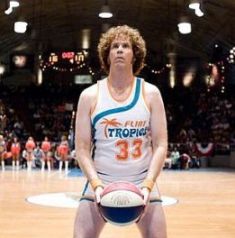 Another Will Ferrell sports flick will inflate this weekend, capping off a nationwide “Funny or Die” promotional tour that brought him to Radio City Music Hall Sunday night. The movie is Semi-Pro, which stars Ferrell as Jackie Moon, owner of the 1976 Flint Michigan Tropics, a team in the maverick ABA basketball league. To keep his career alive against all odds, Moon initiates off a series of increasingly desperate publicity stunts to attract fans – behavior that does sound awfully familiar.

The supporting cast is promising, with White Men Can’t Jump’s Woody Harrelson and Blades of Glory vet Will Arnett, but expect the critical backlash against Ferrell to amplify (Village Voice: "semi-funny"), while your college-age siblings quote the dialogue incessantly. Here’s the trailer, which has its moments but isn’t quite as funny as this imaginary interview with Will Ferrell. (Sample: All you ever do is play an idiot who shows off his sloppy body. Do you think America will ever get tired of that? Will: Absolutely not. American film-goers are total idiots.) 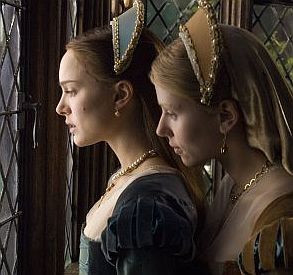 Also opening tomorrow is the Natalie Portman, Scarlett Johansson bodice ripper, The Other Boleyn Girl, adapted from a bestselling novel about the 16th Century Tudor court. Portman and Johansson play the legendary Boleyn sisters, Eric Bana is Henry VIII, and Variety’s Derek Elley calls it “sexy,” with a “fast-moving final act of plot reversals and rolling heads.” And Christina Ricci stars in Penelope, a cutesy modern-day fairy tale about a cloistered socialite (Ricci) who’s stuck with a pig nose thanks to an aristocratic ancestor’s curse. The Village Voice deems Ricci “appealingly human,” the movie “faintly touching.”

On the other end of the spectrum, there's Ramin Bahrani's Willets Point-set film, Chop Shop, which is playing at Film Forum. About an 11-year-old street orphan who lives over an auto-body shop and dreams of a better life for himself and his 16-year-old sister, the NY Times' A.O. Scott found "lyricism" in its "unsentimental, soulful appreciation of the grace that resides in even the meanest struggle for survival."

Also, the Sunshine Theater has Burning the Future, a documentary about West Virginians fighting the coal companies who have poisoned their ground water and raped the mountains. (You can wash that downer down with a midnight screening of Scarface at the same theater.)