Week of the Dead

While most of the city is dressing up as VMA's Britney, Amy Winehouse or some other of-the-moment pop culture trainwreck -- others are celebrating this week in a more non-pop cultural way. Starting Sunday night, and continuing through November 2nd, is the Dias de los Muertos (Day of the Dead) festival at the St. Mark's Church in-the-Bowery.

What to expect: gatherers to be welcoming the souls of the dead on their annual visit home, flowers, incense, pan de muertos bread, candles, skulls and plenty of mementos of the departed displayed on altars. Much of the beauty of this festival is in the living, the costumes from last night's celebration were magnificently intricate... 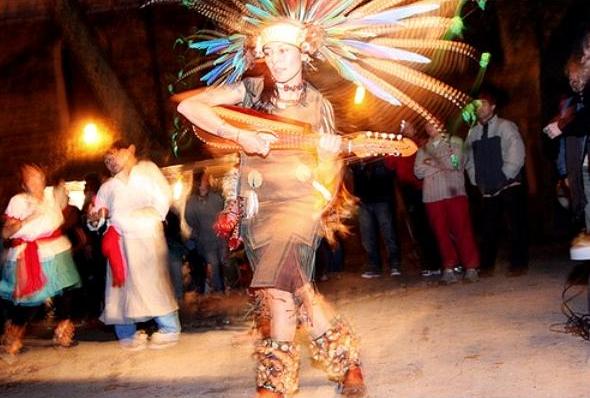 A call to one of the festival's organizers hasn't been returned yet, so we're not quite sure what's in store for tomorrow (but will update once we find out) -- however Thursday there will be an all night vigil starting around 10pm and ending at 7am. The traditional ceremony will include dancer chieftains and the creation of an altar. The public is invited, and the 9 hour ceremony will conclude with a mariachi band. More info on the week can be found here.

#amy winehouse
#church
#culture
#event
#flickr
#photos
#pop culture
#the city
#this week
#Winehouse
Do you know the scoop? Comment below or Send us a Tip