Week in Rock: Winding Down '08 Edition 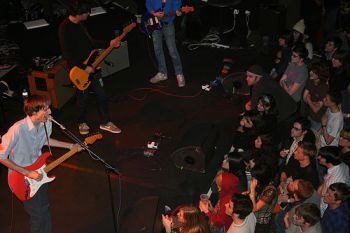 Gummys Awarded
This past Monday, Stereogum celebrated the release of their annual reader-pickedGummy Awards with a little get together at the Music Hall of Williamsburg. In what felt more like an open invitation holiday party than any sort of awards show, the blog got Bell, Violens and Deerhunter to perform to a packed room. While Deerhunter haven't been strangers to the city this year, playing over a half dozen times in 2008, this was perhaps their best effort yet—sounding a bit restrained, but utterly consistent and on-point throughout. They had a tough act to follow in Violens, who played an excellent and moving opening set, perhaps positioning themselves for a breakout year in 2009. For videos from all the acts that night, check here.

Langerado Lineup Announced, Underwhelms
In what may be a troubling precursor of what's to come next year, the Langerado Festival limped out of the gate with the first substantial lineup for a 2009 festival. The mid-March, Bonnaroo-affiliated fete, relocated this year to a park in Downtown Miami, announced a major chunk of their lineup next year to a collective shrug. While not taking anything away from their intermediate card, which is somewhat stacked with the likes of Broken Social Scene, Ryan Adams, Girl Talk and Dashboard Confessional, there is a considerable lack of actual headliners attached to the event. The largest names on the bill are Death Cab for Cutie and Snoop Dogg, and while both are able to put on a compelling festival set, neither are worthy to top the bill of what should be one of the bigger national festivals of the year (especially with rumors of Phish and Morrissey swirling about right up until the announcement). While this is not supposed to be the final list, and mega acts have been known to jump on at the last minute (see Prince at Coachella last year), this could very well be a signal to the recently revived American festival circuit that the economy will effect these expensive weekend getaways. If the money's not there to secure the major acts, fans won't pay for a watered down experience.

Best of '08 Lists Begin with Rolling Stone
With Black Friday passed and the holiday shopping season in full swing, magazines and websites are starting to post their top album lists of 2008. Rolling Stone, while facing a physical downsizing in terms of page width this year, still holds a respectable place in the eyes of many for their critical opinion. They posted a top 50 list this week, which is a pretty even mix across several genres and generations. Sure, old RS standby Bob Dylan gets the #2 spot for a B-sides collection, and they are clearly not afraid to award the mainstream with Jonas Brothers and Taylor Swift picks on there, but a handful of breakout acts such as No Age, Bon Iver and Ra Ra Riot crack the top 50 as well. Awarding TV on the Radio the top spot is a pick many publications will not be afraid to make, considering their ever-growing cultural appeal.

Photo of Deerhunter playing the Gummy Awards by Jen Carlson.