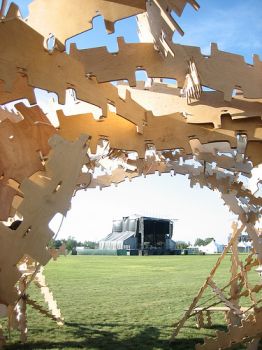 All Points West Has Begun
Sure, you've been hearing a lot about it recently, but this weekend's festival is actually a pretty big deal. Historically, local giant fests don't go so well when set up near New York, but this one seems to have the backing and support to actually get done right. First off, it certainly helps to have a band like Radiohead headline two nights. You can count on one hand the bands who have the combination of mass appeal and credibility to truly give a new festival the bump it needs to establish itself. Second, the association with Coachella, which has become the high-water mark for the ever-growing number of American festivals, gives it a pedigree to live up to. The fact that the festival is actually going forward already puts it in rare company, considering the fates of Vineland and Field Day. Whether it will be able to become an annual tradition, rather than an Across the Narrows-esque one and done flop, is still to be seen.

Bloc Party Back at Webster
Few indie bands that have come up over the last few years have had the lasting appeal of Bloc Party. Despite only 2 full albums and a few scattered singles since they first played the states 4 years ago, the London band has continued to tour these parts regularly. On this week's trip to NYC they took a break from the theaters and brought it back to one of the clubs that propelled them to stateside stardom. Webster Hall has never been the ideal venue for many, and back when they first played the club, it was one of the most notoriously hot and miserable shows of the summer. But that was also at a different point of their career arc, when playing a "giant" Webster Hall show felt akin to selling out. 3 years later, now that Webster is a relatively intimate stop for them, there were far less complaints despite an equally hot August night. The band was stellar for their tour-ending set, reminding many who lost track of them how great some of those older songs still are. Frontman Kele left the stage warning that we'll see them again "Sooner than you think," so stay tuned...

Black Lips & Deerhunter Play in the Shadow of Kahn
Another hot one at the pool this week. The crowds packed in once again for the buddy lineup of the ATL's Black Lips and Deerhunter, along with the insufferable King Kahn. While both of the top bands on the bill have occasionally been known for their on-stage antics, they've always managed to tread the fine line between obnoxious and entertaining. Kahn, on the other hand, made it his mission on Sunday to overshadow the two more talented bands, taking the stage during their sets at random to hear himself speak at the mic or moon the crowd with flowers sticking out of his butt. While it's clear he found himself absolutely hilarious, and his friends in the other bands didn't seem to mind, it put a damper on what could have been a truly excellent afternoon of music. MTV caught the three acts backstage talking about what they'd bring to the VMAs this year, if invited to perform--an entertaining watch.

Photo of an All Points West pavilion by Josh Draper.