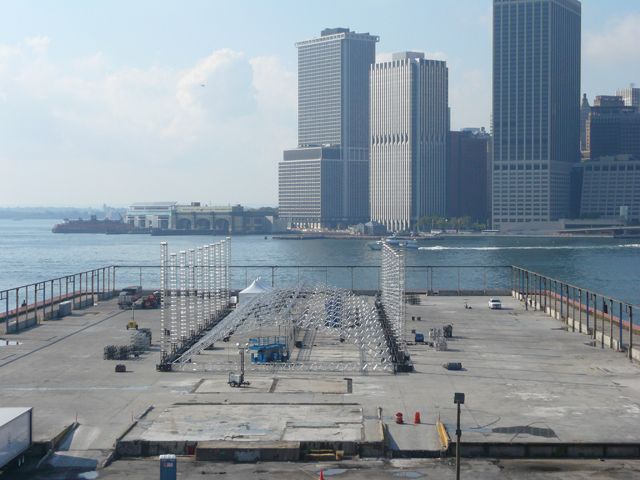 Party at the Pier
Brooklyn's Pier 3 is being taken over by Diesel this weekend (it's good to know that during this time of financial crisis there's one company that can shell out $200K for a party). Over the week it's been transformed into a Rock & Roll Circus atmosphere, big tent and all, in preparation for the big day Saturday, or as they call it: "the show of a lifetime." With only 5,000 in attendance, the bands N*E*R*D, Hot Chip, Chaka Kahn and M.I.A will join a bunch of zany circus acts, plus deejays Joel and Benji Madden for an evening of fire-and-brimstone debauchery. But what's this, a new rumor is starting to circulate: Britney is definitely, maybe going to be performing at the event! Possibly. If your invite got lost in the mail, you can head to the company's Union Square and Lexington stores today where tickets will be given away on a first come, first serve basis (read: they're likely gone by now). Or you can try to stake out a spot on the Promenade for what should be a good view. Lisa Willner, spokesperson for the Empire State Development Corporation, told The Brooklyn Eagle that "the money will go to the park for maintenance and operations," and that the area "will be turned into a park immediately after" the show.

United Palace Theater is Where It's At
Beck rolled through town this week, playing three shows up at The United Palace Theater in Washington Heights. While he's been remarkably prolific over the last couple years, releasing three full albums in the last four years, he hasn't toured all that much which made these shows a destination for his sizable fanbase. The sets, however, have been pretty straight forward and nearly identical to each other this time. Not surprisingly, they focused heavily on his newer stuff and less on the more popular back catalog. There was also a lack of theatrics from the often unpredictable performer, whose recent tours featured a mish mosh of skits, covers and puppet shows to accompany the tunes. These shows have been completely straight forward, blowing through song after song with barely an acknowledgment to the crowd. Not necessarily a bad thing, but different from what some expected. Tickets for tonight's final show are sold out, but there are plenty available at the usual places...

More Change
As we inch closer to Election day, more and more benefit concerts keep popping up around the city. Last week saw the whopper of the announcement of the Billy Joel/Bruce Springsteen mega rally at Hammerstein, and this week there was a smaller, but still impressive show in Williamsburg with Franz Ferdinand, Guster, Andrew Bird and a whole bunch more playing for Obama. Both of these shows appealed down clearly defined generational lines, but this Sunday there'll be a Democrat benefit for the whole family. David Crosby and Graham Nash are teaming up with Vampire Weekend to play an Act Blue event at St. Raphael's Cathedral on the 41st street. While there are plenty of high roller ticket packages available, the event recently announced an "Economic Stimulus package," where a limited amount of tix can be snagged for only $55 a pair. Grab them here while they're still available.

Also this week:
Secret Prince Show Tonight?
An Interview with Department of Eagles
No Scalping for "Change Rocks" Please