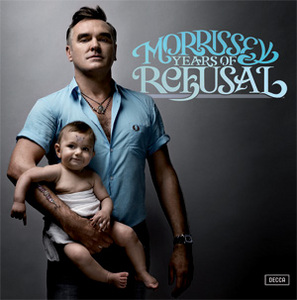 Morrissey Reborn
Never one to bore or keep you off your toes, the Mozzer dropped a couple bombshells this week regarding his plans for early next year. First off, he signed with Lost Highway, of all labels, to release his upcoming record in the states. The Nashville label is best known for pushing Americana/Alt Country types like Ryan Adams and Willie Nelson, which of course he has hardly anything in common with.

Second, he's scheduled a handful of upcoming dates, including some local stunners. Along with a unique date scheduled at Carnegie Hall, Morrissey will be playing the intimate Bowery Ballroom and almost-intimate Webster Hall this time through. Considering previously he's played mammoth venues such as Radio City and a multi-night run at Hammerstein, this is a ridiculous treat for his die-hard fans. Details on how to get tickets to these shows are a bit sketchy as of now, but it will likely involve pre-ordering his new album on iTunes and personally handing over your first born.

Oasis Soaks Up MSG
For a band who has always insisted that they are biggest in the world, they sure do a great job selling the bit on stage. For one night only, Oasis took the stage at the worlds most famous arena to a sold out crowd in support of their generally well received new album, Dig Out Your Soul. While the first half of the set was a mish-mosh of relatively new songs and the occasional B-side, which got a strong response from the brit-heavy audience, the band really kicked it into gear during the second half. They played a constant stream of greatest hits and singles, touching on just about every hit they've ever written, digging back to the Wonderwalls and Champagne Supernovas of our youth. The banter was sparse and pretty hard to understand, and the stage set was fairly minimalist, with some video projections and light rigs, but little else. This didn't prevent them from making their presence felt. They certainly lived up to the self-imposed hype, even closing the set with an epic and unapologetic cover of "I am the Walrus." As only they could.

Pitchfork's Top Albums
What many in the indie world, for better or worse, look to as the definitive and most credible year end lists finally dropped this week. Pitchfork's week long "best of" marathon concluded today with the naming of the number one album of the year, awarded to Washington state's Fleet Foxes. This year the site chose to, almost comically, drag out the top albums list over three days, creating an unranked "honorable mentions" preview before breaking the top 50 down into two concurrent lists. Their top ten was peppered with local New York acts, with the site holding true to their early and surprising praise for Vampire Weekend by slotting them at #7, TV on the Radio's latest at #6 and Track of the Year winner Hercules and Love Affair at #9. All in all quite an interesting year for music, especially in the quote/unquote "indie" world. Gothamist will have a complete year-end wrap up in the coming weeks.

#morrissey
#oasis
#pitchfork
#week in rock
Do you know the scoop? Comment below or Send us a Tip