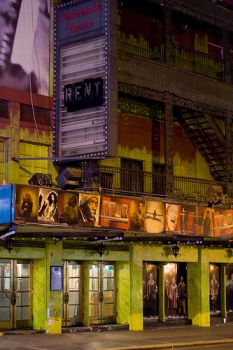 Rent to get Evicted this Weekend
Rent, the rock-musical that did more to force LES hipster culture into that mainstream than anybody would care to admit, will take its final bows this weekend on Broadway. The once acclaimed show, which has been on the stage since 1996, will leave as the 7th longest Broadway run ever, and has built up a devoted following of longtime fans. And, just in case you were dying to get one last fix, but missed out on tickets to this final show, it will be captured on film and brought to theatres nationwide at the end of the month. That said, the show is closing after a down couple of years, and it's pretty clear that its time, and its brand of hipster stereotype, has finally passed on.

Rage Against the Republicans
Perhaps Zach and the gang realized that a comeback consisting only of multi-million dollar paydays headlining massive festivals isn't exactly consistent with the Rage Against the Machine image. As they did in Denver the week before, the band took to the streets and the stage several different times this week near the Republican National Convention in an effort to draw attention to and fight against what they called a "Fascist Republican Agenda." They first attempted to play a free show on the lawn of the state capital, but were thwarted by the police, resulting in megaphone enhanced acapella versions of a few of their hits and a peaceful march toward the convention. Two days later, they played a legit show at the Target Center in Minneapolis, but their post-performance march didn't end so smoothly. The cops showed up in riot gear, and over 100 arrests were made, despite the band's pleas for peace. They’ve got nothing else planned in the near future, but it’d be a shock if this was the last we’ve heard of them before election day.

It's VMA Time Again?
The MTV Video Music Awards have long sold out from the annual New York City staple they used to be, but that doesn't make this increasingly desperate attempt to stay relevant completely ignorable. For the second year in a row, MTV will wheel out Britney Spears to kick off the show and embarrass herself in front of the entire country. They've also got a scattered bunch of has-beens and future stars lined up to perform, including Pink, Kid Rock, Kanye, Paramore and Lil Wayne (whose rise to mainstream hip-hop success is nearly as unexpected as Brit Brit's collapse has been). So no matter how much you hate the show, and how awful MTV has gotten, you'll probably find yourself talking about it on Monday. If MTV can still do one thing right, it's make a big deal about themselves.

Also this Week:
Kurt Cobain exhibit at Soho Grand
Usher and Urban Kick off the NFL Season
Final Thoughts on the Pool
A look at Gowanus's newest venue, Littlefield.
An Interview with East Village Radio

#mtv
#rage against the machine
#rent
#republicans
#RNC
#vma
#week in rock
Do you know the scoop? Comment below or Send us a Tip
A new Gothamist is coming! We’ve moved comments over to our beta site. Click here to join the conversation and get a preview of our new website.