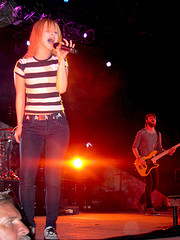 Paramost
While there are plenty of Emo-tinged pop punk bands that speckle the top 40 landscape today, few come across as complete and credible as Paramore. Celebrating their latest record going Platinum this week, these kids from Nashville headlined Summerstage Thursday night to an enthusiastic crowd of youngins. Their unrelenting energy is only topped by the genuine singing ability of pint-sized frontgrrrl Hayley Williams, whose voice powers through song after song as she tirelessly does laps around the stage. While their current tour, with Phantom Planet and others, is soon coming to a close, the final blast of hype before heading back to the studio will come from when they perform at the VMAs a week from Sunday.

Oasis Attempts to Scale it Down
A somewhat weird, though intriguing announcement from Oasis this week. They will be playing a rare club show at Terminal 5 next month, squeezing as much of their massive fan base as they can into the 3000 capacity space. The twist, of course, is that you can't just walk up to the box office and buy a ticket. Instead the band is holding a contest, not to win tickets, but to win an opportunity to buy a $50 ticket to the show. It's hard to argue with a band like this trying to pull off an intimate show, but the presumption that anyone should feel privileged to spend money to see a band is a bit out there. That said, Oasis has never been the humblest tool in the shed. For a chance to buy, fill out this form before noon next Wednesday. Good luck.

Guns n' Roses Bust a Blogger
Music bloggers, take notice. Bootlegging unreleased songs and posting them online may get you sent to jail, and even if those posts provide only solid evidence that the Sasquatch of Rock & Roll, GnR's Chinese Democracy, actually exists. The perp, Kevin Cogill, was brought into custody by 5 FBI agents, and faces a max of 3 years in jail if convicted. What's more, he may be made an example of to enforce a relatively new law that punishes people who leak tunes. In his defense, the blogger took the tracks down as soon as he was contacted by Guns' legal staff a few hours after the songs went up, but it was not fast enough to prevent a widespread leak, or to save himself from charges.

Also this week:
Interviews with The Virgins and Miles Benjamin Anthony Robinson.
The former Limelight is reopening, but not as a club.

#guns n roses
#oasis
#Paramore
#week in rock
Do you know the scoop? Comment below or Send us a Tip