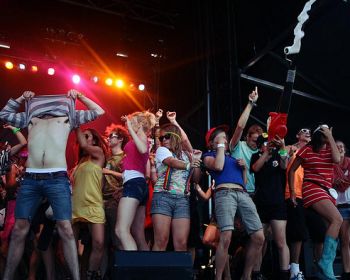 Girl Talk is Still a Big Deal
For a guy who got his break after the whole mashup thing seemed to have come and gone, PC-user Girltalk's sure got some legs. The barely legal laptop artist sold out 3 nights at Terminal 5 earlier this week, packing that airplane hanger of a venue with enough spandex, neon and sweat to make Randy Savage jealous. But with great crowds, of course, bring the undesirable element out. His shows have always been everyone-on-the-stage rowdyfests, but as the crowds get bigger, the scene can get a bit skeevy. The show more resembles a bridge and tunnel shindig than ever before. Lots of open shirts and miniskirts up there. Now, since Gillis's mass appeal is rooted in his manipulation of the music of mass appeal, his fan base could potentially keep growing through the stratosphere. The patience of those who enjoyed these types of things on a smaller scale, however, may nearly be gone.

Letterman's Tribute to Tributes
And why not, right? In classic Letterman fashion, the Late Show spent a week spotlighting some of the more popular cover bands performing today. Rather than a traditional musical guest, Purple Reign (Prince), Cold Hard (Johnny) Cash, The Allstarz (James Brown), Super (Neil) Diamond, and Mr. Brownstone (early era Guns n' Roses) all took the stage at the Ed Sullivan theater this week to perform a song on-air. The lighthearted gimmick gave some exposure to these acts, some of which are now playing somewhat major venues around town. Local heroes Mr. Brownstore, for example, will be headlining Irving Plaza on November 28, their largest show yet.

CMJ Shall Return
The badges have barely been taken off the necks from this year's festivities, but CMJ has already staked out the Lower East Side for 2009. They announced this week that the marathon will return on October 20th and will once again set up shop at NYU up in the Village. While this year seemed a bit light, with many labels and larger bands taking a pass at an attempt to make a splash, CMJ still holds an important place in the local music scene. The purpose, after all, is for smaller unsigned bands to get some ink, and with thousands of writers, DJs and fans still pouring in for the week regardless, the opportunity to get noticed is now a bit more of a level playing field. Bands can submit early for $20 through next Tuesday, and bargain hunting attendees can get a "cheap" badge here (though there are plenty of free shows). Gothamist House 2009 to be announced at a significantly later date...

Photo of Girl Talk at All Points West this summer via tina.gao's flickr.

#cmj
#girl talk
#letterman
#week in rock
Do you know the scoop? Comment below or Send us a Tip
A new Gothamist is coming! We’ve moved comments over to our beta site. Click here to join the conversation and get a preview of our new website.