Week in Rock: F'ed Up Edition 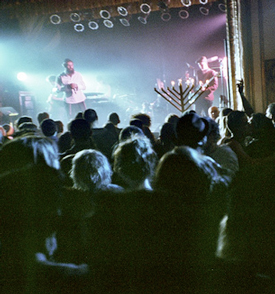 Matisyahu's Eight Crazy Nights
Matisyahu refuses to allow himself to be a flash in the pan! The Hassidic gimmick is back for a New York Chanukah run, playing 8 shows that roughly coincide with the Jewish holiday. He will headline 4 shows a Webster Hall, then 4 at the Music Hall of Williamsburg, which are smaller venues than he has previously headlined in the city. Much like Yo La Tango's similar annual Chanukah series across the river at Maxwells, the openers for this run are often more noteworthy than the headliners. Matis will feature the likes of the Crystal Method and the Chanukah themed Guster side project, the Leevees to kick off some of the shows. Tickets are on sale now. Whether any of these $35 a ticket shows sell out will surely be a test to Matis's actual popularity, rather than his perceived half-hit wonderdom.

CMJ, by Blogs
With the annual music marathon starting up just next week, much focus will be on the official CMJ showcases, with nearly every venue in the city hosting several packed nights worth of artists trying to figure out a way to break out. But for those who may not be participating in the fest this year, but are still interested in keeping a finger on the pulse, the local blog scene has stepped up to present a number or unaffiliated alternatives. First, of course, is The Gothamist House at the Bell House in Brooklyn, running all afternoon from Wednesday through Saturday. Also, of course, is Stereogum's RSVP-only shindig, kicking off at Midnight on Tuesday to open the new Studio at Webster Hall. Brooklyn Vegan will also be hosting a couple events, with one already announced and more details to come next week. For anyone lucky, rich or connected enough to get a badge this year, the official schedule is posted here.

F*cked Up Marathon
To celebrate the release of their latest album, The Chemistry of Modern Life, Canadian punk band F*cked Up performed a 12 hour concert marathon at the Rogan store in the Lower East side. They kicked off the show at 2 p.m. last Tuesday, and went straight on through 2 a.m. The band was joined by a who's who collection of hipster celebrity and musicians, allowing many of them to take the stage and perform sets during the bands many breaks. Amongst others, Tim Harrington, J. Mascis, Moby and the dude from Vampire Weekend were all on hand, helping out on a varied selection of punk rock covers throughout the show. Brooklyn Vegan documented the entire show admirably, and their pics can be seen here.

Also this Week:
Gothamist House Revealed!
An Interview with Brendan Canning of Broken Social Scene
Bon Jovi does not appreciate McCain/Palin use
Prince Plays The Gansevoort