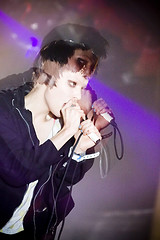 The CMJ Victory Lap: Crystal Castles
Every year at CMJ, there's one band that toiled around the day parties and smaller showcases the year before, only to triumphantly return with a major headlining gig. That award this year goes to Crystal Castles, who headlined a sold-out, packed to the brim Webster Hall Thursday night to an enthusiastic crowd. Without trying to sound too obvious, the popularity suits these guys well. It's not necessary the most accessible, easy listening band out there, and would be a tough sell at a scattershot, brightly lit afternoon party. But when the band controls the environment, with all attention properly directed on them, they create quite a scene, Lead "singer" Alice Glass shrieks and hollers over the 8-bit bleeps and bloops, and while her contribution musically can be a bit off-putting, she is quite the show woman. The crowd was completely entranced, providing the necessary feedback a band like this needs to put on a stellar show. A bit of a told ya so for their naysayers from last year's fest.

Breakout Band: Passion Pit
While they wowed the local scene a few months ago during their Pianos residency, CMJ is a coming out party of sorts for the Cambridge kids, whose rollout has been appropriately slowed. Taking note of all the indie bands who get rushed to the masses too early, these boys have been building a live show resume, gaining experience alongside a committed fan base. They kicked off the fest on Tuesday night, playing a primetime slot at Music Hall of Williamsburg for the Brooklyn Vegan showcase. The marathon's early arrivals got a treat to kick off the week, as the band played its biggest local stage yet to a packed room. Surely this band has bigger things in store in the future, but for the time being, they can be content merely conquering CMJ.

Weekend Preview: What's left?
While the marathon is half over already, it really starts to kick in gear over the weekend. If you're going to be chilling at the Gothamist House all day today and tomorrow (and of course you are), feel free to stick around after for the Bell House's official showcases, featuring Crystal Stilts, The Rosebuds and a Jens Lekman DJ set tonight, and the love-em-or-hate-em spazz rockers of Ponytail tomorrow. Also in Brooklyn tonight is the always incredible Dungen at Music Hall, and Pattern is Movement at Union Pool. For a big blowout finale tomorrow, can either hit up Bowery for Marnie Stern, Vivian Girls and A Place to Bury Strangers, or head up to the Blender Theater for Austin's brilliant instrumental trio, Octopus Project. Any other recs, please leave em in the comments.

#cmj
#CMJ08
#crystal castles
#gothamist house
#passion pit
#week in rock
Do you know the scoop? Comment below or Send us a Tip