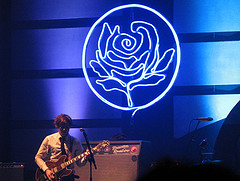 Ry-time at the Apollo
Out of all the choices last Friday night for Halloween, The Cardinals (don't call them Ryan Adams and the Cardinals anymore, that's his new peeve) provided perhaps the most low-key option. The audience was only partially costumed up at the historic theater in Harlem, and were, for the most part, politely restrained when it came to showing their love for the band. The audience stayed in their seats and behaved, and the Cards kept the drama to a minimum, with barely any of Ryan's infamous chatter. They played through almost the entirety of their latest album, as well as plenty from the whole back catalogue. Perhaps taking advantage of the break before returning to tour with Oasis, they even threw in his classic cover of "Wonderwall" to a stone quiet crowd. The band will be back in December with Noel and Liam and the rest at MSG.

The Woodies are Near
MTVU's offbeat "College" music awards show is nearly upon us once again. The curiously named Woodies will be presented next Wednesday at Roseland Ballroom, featuring nominees that spread across a range of vaguely defined indie/emo/alternative hip hop genres. Performing this year are Santogold, Vampire Weekend, Lykke Li and All Time Low. Aside from providing recognition to the almost-mainstream music stars, the awards also, quite admirably, recognize excellence amongst college radio stations and local campus bands, offering awards for each. Along with them, there are the standard Best Video, Breakthrough Artist, and the rest. Vote here through the end of the day for who should win, and check back Wednesday night for the Annual Gothamist liveblog of the event. The show will then air on MTVU November 19th.

The "Stars" Come out for Thanksgiving
Surely nobody expects the most cutting edge performers to grace the floats during the Macy's Thanksgiving Day Parade, so the announcement this week should not be of much surprise. Miley Cyrus and American Idol runner up David Archuletta top the list of kid-oriented artists, both launching an album in time for the holiday rush. Joining them will be James Taylor and Trace Adkins, thrown in to appease the babysitting older folk watching with their nieces and grandsons, as well as ex-Hootie Darius Rucker, who may still appeal to someone, somewhere. The annual kickoff of the holiday season will be hosted by the Today show gang, and considering the pain in the ass it is to see Miley usually perform, you may want to stake out a spot for your little sister along the route this weekend.

Also this Week:
Apes and Androids do Halloween

#miley cyrus
#mtvu
#ryan adams
#thanksgiving day parade
#week in rock
#Woodies
Do you know the scoop? Comment below or Send us a Tip
A new Gothamist is coming! We’ve moved comments over to our beta site. Click here to join the conversation and get a preview of our new website.