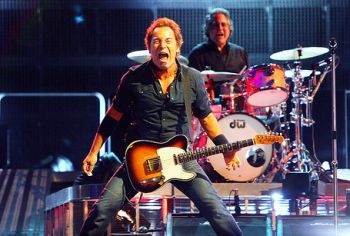 The Boss plays the Swamp
Take football away, and it would seem that Giants Stadium was practically built to host mammoth Bruce Springsteen concerts. The Boss took up a mini residency this week at the 80,000 seat concrete coliseum, making his earlier MSG shows seem intimate in comparison. With the possible exception of Bon Jovi, who has moved into Manhattan for greater lawns, no other performer could command such crowds across the Hudson, selling nearly a quarter of a million tickets over the three day run. Fans know that Bruce and his band aren't getting any younger, and while showing no signs of slowing down, nothing lasts forever. Catch them while they can still perform at this level.

The Killers play "Humble"
Their first act was that of an 80s revival glam-pop band. The next was small-town Springsteen-esque aping. Now? The "just happy to be there playing to you fine people" bit. The Killers played an intimate show at Highline Ballroom on Tuesday to fan club members and those paying close enough attention to snag tickets. Considering their last headlining gig was at MSG, a good 20 times larger than their current venue, this was a treat for their local stable of New York fans, many of whom are credited for their rise to fame in the first place. The band seemed sharp, played a couple new songs amongst the hits and kept the dramatics to a minimum, regularly thanking the crowd and acting thrilled to be playing for "So many people so far from home." Hmmmm. So is this genuine humility from the flamboyant band, or an attempt to re-brand themselves in a kinder, gentler light? Either way it was a refreshing twist, and hopefully a sign of better things to come.

Vineland Officially Dead
This may not seem like news, considering the 2008 version was killed a few months ago, but it turns out the area Central-Jersey Festival, which was announced before, then overshadowed by All Points West, will never get off the ground. The festival was originally very promising, with organizers from Chicago's Lollapalooza and England's Carling festivals coming together to attempt to book it. Turns out it was in a tough spot, having to compete with the much more organized (and Radioheaded) All Points West, plus the regular concert scenes of Philly and NYC. The East Coast is proving to be a pretty difficult place to get a big festival off the ground, with the failures of this, Across the Narrows and Field Day in previous years. Time will tell if APW, kicking off next weekend, is suited for the long-term.

#All Points West
#bruce springsteen
#the killers
#vineland
#week in rock
Do you know the scoop? Comment below or Send us a Tip