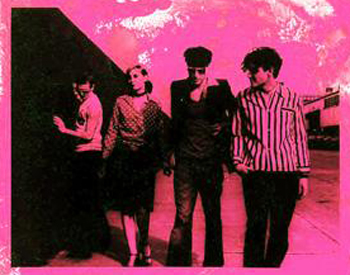 Stellastarr* Revival at Pianos
While the rest of the world is talking about Britney's manufactured comeback, another act that showed so much potential earlier in the decade is back trying to put a dent on the current music landscape. Stellastarr*, the post-Strokes, pre-Killers blogger sensation released two underappreciated albums before fading into the background for the last few years. This week, they’ve made a big stand at Pianos, playing 5 straight nights at one of the clubs where they got their start. The showcase at the smaller venue, including similar sized stops in DC, Boston and Philly, acts as a reboot of sorts for the New Yorkers, who have recently been working on a third album. They've got two more nights left at Pianos, although both shows are currently sold out.

The Grammy Nominees
While they may at times seem like the least impressive of all the majors, the Grammys still hold a respectable place atop the many, many music awards shows put on throughout the year. This time around, to increase exposure, the Grammys put on a televised concert to announce the 51st set of nominees. While the show contained the same rehashed mish mosh of acts that always show up for these types of things, the noms themselves actually had some interesting names amongst them. M.I.A is up for Record of the Year, and Radiohead for top album, and even though both will be crushed by Alison Krauss & Robert Plant, it's nice to see them get a nod. On the dance single front, Hot Chip gets some love, as does Daft Punk's Harder, Better, Faster, Stronger, a song originally released in 2001 (though it was sampled by Kanye in 2007, so clearly it should be in play for 2009.) Finally for the always ambiguous alternative award, the Grammys attempt to play catch up, rewarding bands like Death Cab and My Morning Jacket with noms for some of their most unimpressive albums to date. For a full list of all the nominees, check here, then tune in on February 8th.

A Bright Tree Brings Out Dull Acts
Nobody should expect anything particularly exciting or edgy to come out of the televised Christmas Tree lighting ceremony at Rockefeller Center. It's a showcase of a handful of the seasons more popular acts, singing holiday tunes to remind people of their existence come gift buying time. The problem, however, is that for most of the performers, they actually had to sing. See, the difference between something like this and, say, the Thanksgiving Day parade last week, was that rather than letting the stars dance along to a backing track atop a float, they were forced to actually perform live music. The results were...wobbly at best. Miley Cyrus and the Jonas Brothers are fine performers, but nobody would argue they have much in the way of actual ability. And while the conditions were not ideal, performing live, on television, outdoors and without a proper stage or setting, it awkwardly exposed some of these acts for what they really are…just acts.

#Grammy's
#jonas brothers
#miley cyrus
#Stellastarr
#week in rock
Do you know the scoop? Comment below or Send us a Tip