Obviously if anything is described as "Twin Peaks meets Seinfeld" we're going to click play. Late yesterday afternoon the Nights in UltraViolet web series wrapped up its first 10-episode season, and we recommend checking out the full series, which was created by Matt Cook and Katharine Henner. 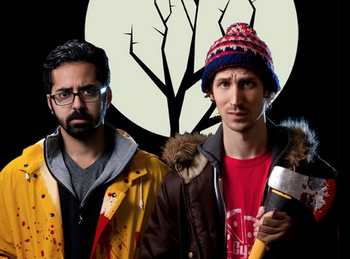 The storyline focuses around "a shut-in author of legal thrillers [played by Carlo Johnson] and a pizza-loving wanderer trying to answer the big question on everyone's mind: What Does It Mean?" Broad City's Ilana Glazer and I Hate Being Single's Rob Michael Hugel also co-star in the series.

This morning Cook told us that Nights will continue into a second season (the finale ended with a cliffhanger), and that other future plans include "a possible spin-off series featuring one of our favorite characters."

For those inspired to create their own web series (we'd love to see more well-produced NYC-based ones!), Cook tells us what it's like for a small production like his to film in Brooklyn—"Securing locations without a budget can be a bit dicey sometimes, but that's the way it goes. For the most part though, Brooklyn is a great place to film. The people are usually really helpful and understanding. The best experience we had definitely goes to Grandma Roses, which is an awesome pizzeria on Graham Ave. They were the most reasonable people I've ever dealt with and it sticks out in my mind as being a really solid example of what makes that neighborhood so great." All in all they shot over 7 months, in 20 different locations, with nearly 100 New York actors.

Check out the first episode below, and the full series here.

And if you know of any other NYC-based web series we should be watching, let us know!

#carlo johnson
#Katharine Henner
#matt cook
#nights in ultraviolet
#web series
Do you know the scoop? Comment below or Send us a Tip