We Spent A Night With Governors Island's Working Dogs I'm in the back of a golf cart, under a plastic encasement intended to help with the cold. It's dark outside, and we have the headlights turned off so we don't scare away the beasts we're searching for. We're trying to be as quiet as possible, as we approach a large field and the wind whips relentlessly around us.

We arrive at the old Parade Grounds on Governors Island, not far from our home for the night—an apartment inside of a historic building nearby.

Did I mention how dark it is? It's November, sunset was five hours ago, and it's freezing.

"Wait here, let me get out to see if I can see any," one of our guides says, "I thought I heard something." We sit still. We really do not want these things to be aware of our existence, if they're even here. But the dogs that are with us are getting antsy, and one of them lets out a yelp. We've run out of time. It forces us to release the hounds.

Max, the eldest dog, bolts from the cart, and suddenly we see the beasts rising up from the dark as he runs deeper into the field. There are probably around 60, and they're making an alarming sound as they go. It's more than a little Hitchcockian.

The geese form a large flock above us, and against the cloud-covered sky that's reflecting the city lights back at us, we can see them head towards New Jersey.

But they'll be back. They often congregate at the ballfield, on the Parade Grounds, and on patches of grass at the edge of the Island. We're here to stay overnight with the dogs in a caretaker apartment on an otherwise completely dark and empty Island. We're attempting, in part, to capture the explosion of geese that rise from one of these spots whenever they see the dogs coming their way.

Max, along with his fellow working dogs—Chip, Quinn, and the newest addition, 9-month-old Aspen—make up the fleet of dogs who patrol Governors Island. Their job is to scare off the geese, and it's a job they love, as these guys are highly energetic. The dogs also find it rewarding; I was told that at first, Max was sad when the geese would fly away, thinking he failed. Max came to Governors Island from a farm in Maryland, where was "fired" from his herding job there for being too friendly. Since he had been trained there to herd sheep into a tight circle, he thought the geese flying off was not the result he wanted.

Border Collies are a friendly breed, and because of that and their highly evolved herding instincts, they are recommended by the New York State Department of Environmental Conservation and the Humane Society as working dogs.

All four of Governors Island’s working dogs (follow them on Instagram!) were rescued from Mid-Atlantic Border Collie Rescue. Max (who is the oldest, at 8) arrived first, in 2015. "He came to the Island when Jim Reed, the Island’s Director of Park and Public Space Operations had tried everything to deter geese from making the park messy—including decoys and lasers," Sarah Krautheim, VP of Public Affairs for The Trust for Governors Island, told me. "The dog patrol is the only thing that worked!"

Since his arrival, more of the park has been developed and opened to the public, and because of that (and since Max is getting older) the Trust has added to the pack. Each dog was adopted by an employee of The Trust for Governors Island.

Quinn is 2 years old, and was adopted by Meredith Johnson, the Trust’s VP of Art & Culture in June of 2017. Chip is 1 year old, and lives with Jenny Staley, VP of Operations and Facilities. And their newest dog, Aspen, is a 9 month mini Aussie mix who lives with Trust Operations manager Danny Santiago and his family.

Together, they patrol the island from these winged beasts (never hurting them, just urging them to leave). At the moment Max and Quinn are the geese chasers, often working in tandem to circle geese from either side. Chip and Aspen are still puppies, and are currently receiving basic obedience training. They also go out on patrol to monitor Max and Quinn (or, you know, adorably distract them). Soon they will see "a special goose trainer to help emphasize their basic training and associate a feeling of success when they see a flock of geese flying away," I'm told. "We give the dogs a lot of love when they chase geese off the Island, to reinforce that them flying away means a job well done."

Of course, the geese come back eventually, and there are times the dogs aren't there to patrol, but what this system lacks in perfection, it makes up for in cuteness. I mean just lookatheseverygoodboys...

Happy Howl-O-Ween from your favorite working dogs! We hope everyone gets more treats than tricks! 🎃☠️👻🐶🍬🍫🍭

As for their hours, the dogs start first thing in the morning (at sunrise), and make the rounds again mid day, late afternoon and before sunset. 3 or 4 times per week they stay overnight on the Island with staff, in the caretaker apartment; on those nights they will do additional patrols around 10 p.m., midnight, and sometimes around 4 a.m. The night myself and videographer Jennifer Hsu stay over, we're with Mollie McGinnis, Director of Operations Planning (and unofficial dog trainer and wrangler), Jenny Staley, and Sarah Krautheim (all of The Trust).

On these overnight occasions, the dogs also come in handy for ghost herding. The night we stayed with them, a noise was emanating from somewhere. I was told it hadn't been a sound anyone had heard before. I was also told around this time that people were killed in a courtyard just outside our door back in the 1700s and 1800s. I don't think this was all in an effort to psychologically torment me throughout the night?

The staff took the dogs down to the basement to locate the sound/ghost(s), which by that time seemed to move into the walls on the main floor. I poured a little whisky in my glass, put my trust in the dogs, and eventually returned to our game of Golden Girls Clue in the dining room; a cannon sat in our view just outside the window, and the Manhattan skyline beyond that. The noises continued as I fell asleep later that night, but I assume Max & Co. eventually charmed the spirits away. 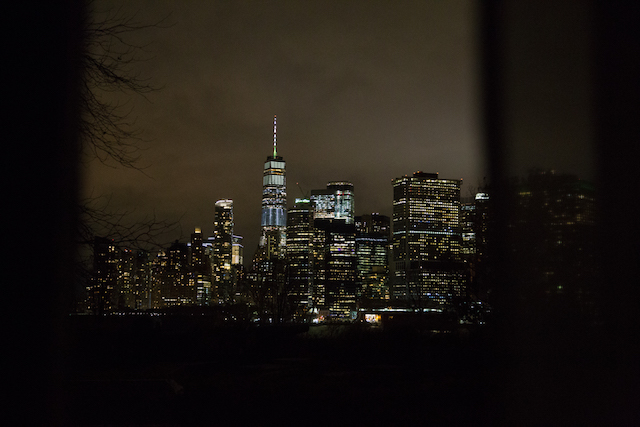 A little before sunrise, we're back at it.

"We have about 150 geese land on the Island per day," Krautheim says. "Canada geese can be lovely to look at, [but] they leave a mess. They eat up to four pounds of grass a day and leave over a pound of waste per goose! [And] geese will eat whatever material is near them where they land, then sometimes digest seeds of invasive plant species that harm the island's landscapes."

They can also be aggressive toward people when they are nesting. "To ensure the enjoyment and safety of visitors, as well as the safety of the geese, our working dogs work to keep the geese off our lawns," Krautheim explains. "Reducing the goose population helps our overall efforts to create wildlife habitats and increase ecological diversity on the Island in the form of terns, owls, kestrels, peregrine falcons, song birds... as well as a variety of flourishing plant life."

#dogs
#governors island
#working dogs
#original
Do you know the scoop? Comment below or Send us a Tip