We Love The Met's New Logo, So There

In 1971, the Metropolitan Museum of Art adopted the logo you are likely most familiar with, an elegant, twirly swirly "M." This was "drawn from the museum's collection, from the Divina proportione woodcut in Renaissance-era book by Fra Luca Pacioli, designed after Leonardo da Vinci," ArtNet explains. "The design, which overlays the letter M on top of a circle and a square, with smaller circles resting on each serif, recalls Leonardo's famous Vitruvian Man drawing with its proportional geometry." Here it is: 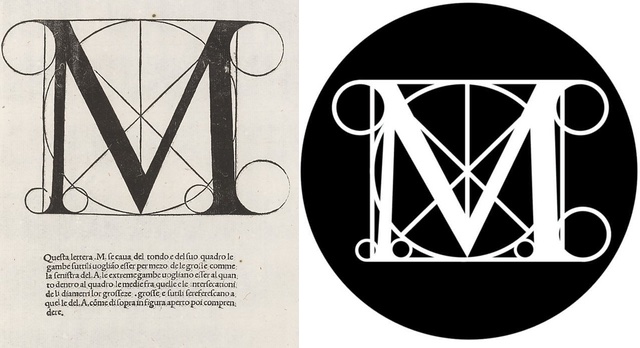 It certainly has suited the Museum just fine, but as the Millennials enter Phase 2 of their takeover, it's time for everyone to cater to their aesthetics and freshen things up.

So as the Museum approaches the opening of their new modern & contemporary art outpost, the Met Breuer (opening on March 18th in the old Whitney Museum home on Madison Avenue), they've trotted out a new logo which embraces their nickname: The Met. The Met is now your cool neighborhood Museum, where parents let you drink in the basement and Snapchat with your boyfriend. But when the new logo—which has a whiff of Robert Indiana—surfaced recently, it came under immediate fire.

It reads more 1970s than 21st Century, and this bold, vintage style isn't winning over everyone—earlier this week Justin Davidson at Vulture wrote an unrelenting takedown of the new look, calling it a "graphic misfire," and "typographic bus crash." He also claimed The Met was in danger of becoming a "wannabe MoMA." Burn?

But the Wolff Olins-designed logo (that's not a person's name, btw, that's a branding firm) will replace the old antiquated "M," whether you, sir, like it or not.

Reps for Wolff Olins told the WSJ that "the project is about far more than just a logo—it is about expanding the reach and relevance of the Met.” Their goal is to help companies "shake off their corporate camouflage." And in a statement released by The Met yesterday, they explained their decision:

"The new logo no longer relies on symbols and, instead, is based on the commonly used name ‘The Met,’ which has an immediacy that speaks to all audiences. It is an original drawing, a hybrid that combines and connects serif and sans serif, classical and modern letterforms. In this respect, it reflects the scope of the Museum’s collection and the connections that exist within it. There may be debate about the logo because it involves change, but the museum chose it because it represents something simple, bold, and indisputable: The Met is here for everyone."

I, for one, welcome our new Met logo, and think it would look fantastic on some buttons. And there are some others that agree—the NY Times points to one Dylan C. Lathrop, who wrote on Twitter that "the new Met logo is cool. Haters can check out the science museum or whatever." This would be a great tagline for The New Met, we're going to give them a call...