We Hope She Didn't Get Stood Up 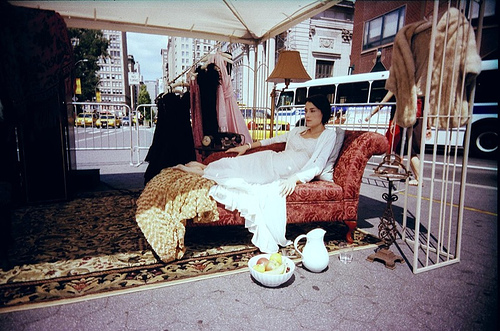 Whether you're a fan of the reality genre or not, voyeurism has injected itself into every form of entertainment since shows like The Real World gave anyone with cable a chance to see the day-to-day lives of total strangers. With everything from HBO's Voyeur to watching a band in a bubble, we wish this were enough to satiate those creepy peeping tom's out there!

The NY Times now reports on Lián Amaris Sifuentes and her “Fashionably Late for the Relationship” performance, which recently lasted 72-hours and will soon be compressed in to a 72-minute film which shows her preparing for a date. At the the southeast corner of Union Square, Sifuentes' goal was to garner "attention to the private feminine ritual not only by performing it in full view of the Manhattan public, but also by performing it deliberately." In her preparation she looked in the mirror, took a disco nap, tried on dresses, drank some wine...all slowed down to a pace that would make the average woman seem to get ready in a flash.

While the live performance prolonged each step (drinking the glass of wine took seven hours), the film will show her getting ready at a normal speed (with passerby going so fast they'll seem like a blur). Since the performance was being filmed in such a high traffic area, there are sure to be plenty of those blurry extras:

Generally people stayed clear, whether out of courtesy or affected indifference. It didn’t help that in Union Square on Saturday “Fashionably” was competing for attention with the usual drum circles, art vendors, “Free Palestine” people, “Free Hugs” people, skateboarders and the farmers’ market.

Mr. DuBois, who had not anticipated such a big, intimidating production, was a little frustrated, knowing that spectators lingering in front of the camera both would make a more interesting effect in the film and be good for the performance. Production assistants encouraged people to walk through.

Of course, many asked questions as they passed through, such as "when is she going to strip?" while others just had some directorial advice. Maybe they should have left a tip jar, because if you've ever wondered how much something like this would cost to do, the final budget was around $45K, which they narrowed down from $100K with a little help from friends and volunteers. If they waited much longer, the film probably wouldn't have happened at all due to the possible new restrictions.