Don't let the confounding title of Jackie Sibblies Drury's hit play scare you off. Because the show concerns an ensemble of well-meaning actors struggling (and failing) to develop a play about the German genocide in Namibia around the turn of the 20th century, the project's unwieldy and semi-redundant name does eventually make sense in context. It is—we're only going to say this once, so deep breath—We Are Proud to Present a Presentation About the Herero of Namibia, Formerly Known as South West Africa, From the German Sudwestafrika, Between the Years 1884-1915. This, Sibblies Drury may be suggesting, is what you get when actors' collaborative reach exceeds their clumsy grasp. But in these characters' defense, at least they're aware the genocide happened, which is something many of us—including the playwright—have for a long time ignored.

Upon arrival at Soho Rep, you'll be instructed to grab one of the folding chairs stacked against a wall and take a seat anywhere in the space, which has been stripped down to evoke a dingy rehearsal room. Folding conference tables consume most of the area, piled with actorly accoutrements—Ricola, pencils, hand sanitizer, and various books related to theater and the topic at hand. In one corner, a sad coffee maker, in another a projection screen. The fluorescent overhead lights are jacked way up, and it comes as no surprise when the actors stand up from their seats scattered among the spectators. We're about to be fully immersed in their "process," as if unfolds inches away. Don't worry, irony isn't dead.

At turns funny and unsettling, Sibblies Drury's play-within-a-play gently lampoons actors' tendency to let their own self-awareness and self-importance eclipse all else. In the wrong hands, this approach might have resulted in a broad and cliched skewering of easy actor targets, but there's a keen subtlety at work in both the performances and in Sibblies Drury's writing. In an interview with Brooklyn Rail, Sibblies Drury explains that she "initially planned to tackle the material through a more straightforward approach, as historical drama:

"I tried to write a good play and I did not write a good play,” she says. “I wrote a very bad play... I looked at that script and was really embarrassed by it and by its badness, and also by the presumptuousness of which I thought I could accurately represent this thing that is incomprehensible, let alone representable,” she says. Sibblies Drury worked through her failure by developing a play-within-a-play about the event, “where a group of actors failed in similar ways.” 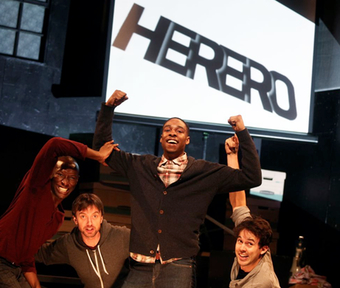 The fine ensemble, consisting of half white actors and half black actors, proves adept at portraying inadequate actors without falling into the trap of commenting on their characters or reducing their parts to cheap sketches. As they flail about in their effort to tell the story of Germany's atrocious treatment of Herero people, their creative differences begin to fracture along racial lines, and the dark nightmare of the source material begins to take hold.

What starts out as a quirky historical romp, replete with colorful slapstick, dramatic lighting changes, and a goofy A.V. presentation, finally erupts into a downright frightening maelstrom of racist violence. A long extension cord becomes a noose, the white actors completely give in to the brutality of their roles, and the group finally reaches an incantatory breaking point. If they intended to get me worried the floor of the theater would collapse, they succeeded.

And then, with the mother of all awkward pauses, "We Are Proud to Present..." ends with an uncomfortable whimper. The winded actors file out one by one, shocked at the fury they unleashed, and finally the audience is left alone to stare at each other—the house lights up once again—unsure if the "show" is over and wondering if they should leave. I only wish director Eric Ting had gone all the way with this post-climax anti-climax and nixed the curtain call, leaving each spectator to decide for themselves whether they should continue sitting on the sidelines or stand up and take action.

"We Are Proud to Present a Presentation...," which was supposed to close this weekend, has been extended one week to Sunday, December 9th. Tickets cost $35, with $15 Student Rush tickets also available.

#Jackie Sibblies Drury
#opinionist
#soho rep
#theater
#theater review
#original
Do you know the scoop? Comment below or Send us a Tip