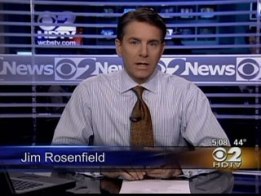 It may be Fleet Week, but the U.S. Navy is not the only one in the city dropping anchors this week. WCBS-TV veteran anchor Jim Rosenfield is the latest victim of the CBS local news cutbacks here in New York.

Rosenfield joined the station in 2005 when he jumped ship from WNBC where he was one of Sue Simmons “anchor husbands” on Live at Five. It's been almost a year since he and Dana Tyler were moved from the flagship 11 p.m. newscast in favor of younger talent (coincidentally a breach of Rosenfield's contract). However, the station has actually improved in the ratings since the youth movement started.

Rosenfield was essentially the lead male anchor until recently, since he covered many of the station's major events and big stories. In the past few months, Chris Wragge has gradually shifted into a more prominent role at the station, something reflected in the stations promos.

Previous WCBS cuts claimed Andrew Kirtzman and Scott Weinberger at WCBS along with some behind the scenes people. Hopefully the station will remember the Warner Wolf fiasco four years ago and allow for Rosenfield to have a proper goodbye and send-off.