Waterfalls Will Really Tie the East River Together 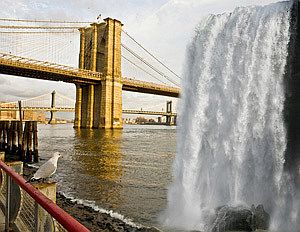 Danish–Icelandic artist Olafur Eliasson will work with the Public Art Fund – a nonprofit that brought Anish Kapoor's "Sky Mirror" and Jeff Koons's "Puppy," to Rockefeller Center – to bring freestanding waterfalls to the East River this spring. The project will be officially announced tomorrow, but a source tells the Sun that the waterfalls will rise 60 to 70 feet above the water, which is more than half as high as the Brooklyn Bridge roadway. The spectacle will be visible from the area around the Seaport and Brooklyn Heights.

The waterfalls are expected to flow in tandem with a major Eliasson retrospective at MoMA and P.S.1 in April. That exhibition is currently at the SFMoMA through February; it includes the much buzzed-about work called “Your mobile expectations: BMW H2R project.” Sealed off in a massive freezer, museum goers are given warm blankets and permitted inside to view a BMW hydrogen-powered race car and with a translucent surface of steel mesh, reflective steel panels, and ice.

The East River waterfalls won’t be Eliasson’s first, but they will be his biggest; in 2005, he created a 20-foot outdoor waterfall in Scotland. The Sun’s source says that the project's estimated to cost between $9 million and $11 million. It'll all be worth it to see submarine artist Duke Riley try to go over the East River Falls in a barrel.