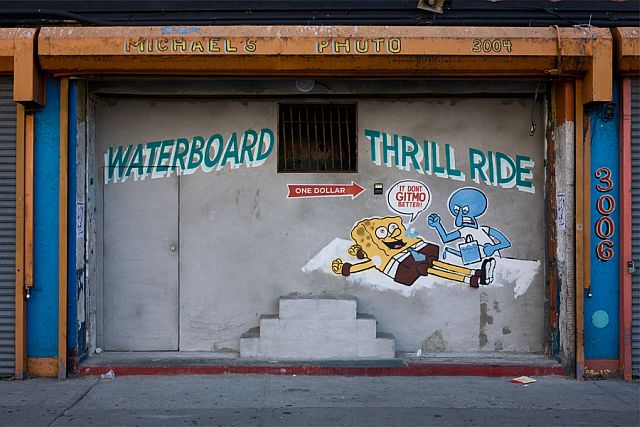 As part of a Creative Time initiative called “Democracy in America: The National Campaign,” artist Steve Powers has turned a former photo booth on Coney Island into "The Waterboarding Thrill Ride," an animatronic diorama that depicts a prisoner being waterboarded. The Times describes the scene:

If you climb up a few cinderblock steps to the small window, you can look through the bars at a scene meant to invoke a Guantánamo Bay interrogation. A lifesize figure in a dark sweatshirt, the hood drawn low over his face, leans over another figure in an orange jumpsuit, his face covered by a towel and his body strapped down on a tilted surface.

Feed a dollar into a slot, the lights go on, and Black Hood pours water up Orange Jumpsuit’s nose and mouth while Orange Jumpsuit convulses against his restraints for 15 seconds. O.K., kids, who wants more cotton candy!

He also tells the Times that his initial idea was “for real people to undergo real waterboarding, right there in real time. [Powers] would be the first volunteer, then he’d perform it on the next guy, who’d turn the hose on the next one, and so on.” But at the urging of his wife, he decided to settle on “robot waterboarding.” Which doesn’t impress Coney Island old-timers like Janice Carter, who says the robots are just a big scam: “It’s a gimmick. When they have the sideshow, you see real people. That’s legit. But this here? Uh-uh.” Clearly, this is Christopher Hitchens's big break.