"The lawn is now open," a woman announces in a calm, steady voice similar to one you'd hear in Hunger Games, right before everyone tries to kill each other.

I've always been a little bit curious about the Bryant Park movie night and, mostly, the people who attend. Every summer, in the heat (when we could just be having outdoor movies in the fall), hundreds of New Yorkers surround the park's lawn hours before the movie begins, when you and I are still at work. At exactly 5 p.m. they all trample each other to secure a spot on the lawn, where, three hours later an old movie that they've seen plenty of times already (probably) will be screened.

Last night Bryant Park's outdoor summer movie series started with Ferris Bueller's Day Off, and because I am mesmerized by it every year, I wanted a multi-camera shot of that moment the lawn opens. Like Hemingway once wrote, "Nobody ever lives their life all the way up except those people who set up their picnic blankets first on movie night." To capture Manhattan's version of the Running of the Bulls, we would need at least three angles: one from a private terrace on the 24th floor of the Bryant Park Hotel, another from the 20th floor of 1095 6th Avenue, and another from the ground. With the help of our videographer Jessica Leibowitz, who also stuck a GoPro around 250 feet above the park, it all came together.

Good news? Looks like Bryant Park's movie night audience has diminished significantly since last year, so you can probably start showing up at a normal hour if you don't mind the cheap seats. 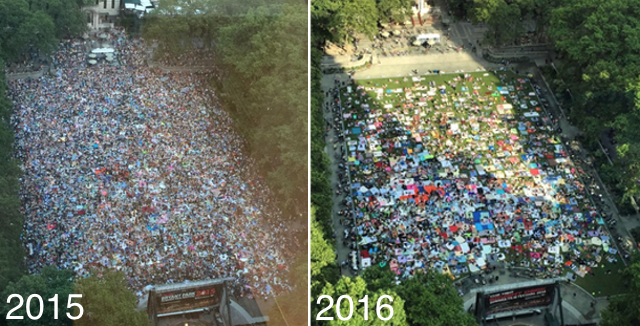 What happened? (Photos by Sarah Bel)

Coming up next Monday, June 27th: East of Eden.