Expertly sizing up the crowd at Williamsburg's Union Pool, Bryan Bennett, the man who once held the title of America's Rock Paper Scissors champion, declared, "There’s plenty of people here I can take money from. I take all currency."

Bennett homed in on a hedge fund employee with a cardigan wrapped around his neck and tried his time-tested opener: "Hey, have you heard of Rock Paper Scissors?" After some convincing, they both tossed a few bucks on the ground. Bennett won two out of three and collected his winnings, moving on to another group of marks. His opener, he explains, is "unassuming. They don’t know I’m about to take their money."

Bennett, a 32-year old New Jersey IT guy who just quit his job at Apple, says he has been playing Rock Paper Scissors “professionally” for about eight years. When he took home the title of second-place (out of 500) at the 2006 World Rock Paper Scissors Championship in Toronto, the prize was $1,800. A 2006 NYC Times article named Bennett a “member of the New Jersey sports pantheon.” Last Saturday, I saw him hustle $10 in a little over 30 minutes in a Brooklyn bar. 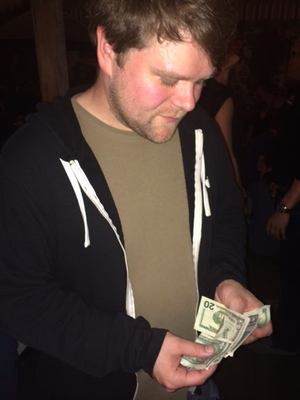 On most weekends, Bennett takes the trip from Glen Ridge, New Jersey, to Brooklyn to pad his pockets. He says he's taken home as much as $300 a night and is known to play $100 games at dive bars—those high stakes games usually take place in the wee hours when less-inhibited bar patrons are willing to put more cash on the line.

Asked how he developed an affinity for a game which, at first glance, seems entirely random, he says it all started when he and his friends were arguing about being the designated driver. Bennett lost. “When we got to the bar,” he remembers, “I was like, ‘Why did I lose to these idiots?’ So we all started playing at the bar. People came up to us and asked to play for money . . . the three of us took home three, four hundred bucks that night.” Later he give me a simpler explanation: “Drinking.”

Bennett believes there's a resurgence of Rock Paper Scissors [RPS] in Brooklyn, so he makes the pilgrimage a few times a week, zeroing in on Brooklynites who look particularly rich, playful, adventurous or stupid. Even as they hand Bennett their money, they seem to enjoy it. “That was awesome,” said one impressed loser after a recent RPS defeat at Union Pool, respectfully taking Bennett’s hand in his.

“It’s a bit of an outsider’s game,” Bennett later explained. “They’re open to it being more than a silly game. They think it’s a true sport.”

Apparently, it is. Bennett cited three books written on the topic. But it’s more than theory, he says. “It’s a psychological battle.” Bennett’s got a special knack for predicting what people will “throw” just by looking at them. He says that women throw Scissors 70% of the time. He'll judge how cocky someone is and fake a loss, playing on their ego, and then go in for the kill when they agree to raise the stakes.

Bennett was even tapped by Northeastern University psychology professor Judith Hall to participate in a study on nonverbal communication. He won 84 percent of his matches. “Everyone thinks this is a game of chance,” Professor Hall told the Catholic University of America magazine. “We were quite astonished.”

Players tend to follow what the study calls “persistent cyclic flows.” Because of this, Bennett said that the hardest challengers are ones who don’t put thought into it. Local Brooklynite and Saturday challenger Patrick Johnson used “random intuition” against Bennett. Even then, Bennett won, and followed up saying, “you can still win. It’ll just take you a dollar to try.”

Since his glory days (he placed within the top 64 at the more recent tournaments he attended), Bennett’s been hustling Brooklynites with what he calls “Street RPS... I’ll go up to anyone. I don’t give a shit.”

#brooklyn
#gambling
#rock paper scissors
#williamsburg
#original
Do you know the scoop? Comment below or Send us a Tip