Elevator Repair Service, the idiosyncratic little theater troupe that previously enthralled us with a seven hour-long adaptation of The Great Gatsby, is finally getting with the 21st century with their new chamber piece Shuffle. The site-specific performance is being staged tonight and tomorrow night at the Brooklyn Public Library, where actors from the company will stop listening to fallible human director John Collins and start obeying the commands of pristine computer algorithms.

The short performance piece takes over the entire language & literature section of BPL’s Central Library, where hand-held iPhones pull portions from three classic works of literature that ERS has brought to innovative life: The Great Gatsby, The Sound and the Fury and The Sun Also Rises. The audience and actors mingle together as the performance spontaneously unfolds amongst the stacks, according to the whims of The Machines.

Shuffle is being presented as part of The BEAT Festival, short for Brooklyn Emerging Artists in Theater, which claims to be "the first festival to feature performing artists from Brooklyn, in Brooklyn, for Brooklyn." Earlier this week Collins, the Artistic Director of ERS, took time to explain what this show is all about. Tickets are available here for tonight and Saturday night's performances. 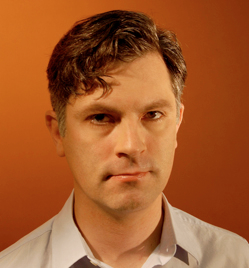 (Ariana Smart Truman)
Shuffle! What is it?

It's an unusual project for us. Rather than being a kind of conventional theater production—which is more or less what we normally do in terms of being in a theater, on a stage—this is an installation piece, which means it doesn't really have a beginning, middle or end. It's something that's a kind of performance that the audience is invited to immerse themselves in. We like to do it in libraries, so this is a great opportunity for us to get the Brooklyn Public Library.

What happens is, you enter a room in the library and the performers are all sort of moving in and around the stacks and desks in the library. They're performing in these kind of moving scenes and monologues that a computer is assembling by sampling the texts of The Great Gatsby, The Sound and the Fury and The Sun Also Rises. The way that it's sampling them...Ben Rubin and Mark Hansen, who we're collaborating with on this piece, have created these algorithms that analyze the text and data. It's very similar to other projects of theirs that they've created for the New York Times and the Public Theater and in other places. It analyzes the text for certain similarities that it's been programed to look for. For example, sentences that begin with the words "I am." It will create a monologue by stringing together all the sentences from the three novels that being with "I am."

So it's got a kind of absurdity to it, but it also has a way of shedding a new light on the language of these novels, which were all written in the 1920s. It makes some scenes that are humorous, some that are kind of sad, some that are strange, and in the middle of it all you'll suddenly recognize a famous line from one of these books. The way the actors get these texts is kind of in real time: the computer uploads the script to a server and the scripts appear on iPhones that the actors have tucked into books they're carrying. The script scrolls by and they don't know what they're going to say until their line scrolls up on the screen. So it's got a kind of manic energy to it, with the actors being told to go different places and say different things in real time.

How do they know where to go? As the scripts scroll by they'll see their name and their name will have a number in front of it. We've designated different areas of that room in the library in advance so they know which area to go to based on the number that they're given.

Is the audience moving around the room with them? There's not one specific, set place for the audience to be so the audience can chose which theme they want to follow. Occasionally the entire room will be engaged in one scene, either because all the actors will be speaking in unison or because they'll sort of alternate one at a time and you'll hear the sound kind of move around the room.

You have a computer choosing this; in a sense the computer is directing this performance in real time. Is this the future of theater? [Laughs] I hope not because I'm a human director!

Are you worried you're pulling a John Henry on yourself with this? [Laughs] It's interesting, there have been other people...the director Annie Dorsen has been working with this lately as well, this idea of algorithm as performance. I think it could be a part of the future of performance. It's an experiment, absolutely an experiment for us. It's almost more a kind of installation art than it is theatrical performance in any kind of conventional sense.

It seems a little bit unusual for Elevator Repair Service, at least from an audience's perspective. Take GATZ, which was not a high tech production. I know the sound design is very meticulous but there aren't flat screens or multi-media involved, the process is very organic. So how does this relate to your previous work? There was a proposal for us to collaborate with Ben Rubin and Mark Hansen. They had done several installations that involve this kind of creative data analysis. The way they usually present them is in the form of video projection or they create these really interesting sort of sculptures that consist of little video monitors and LED screens. Sometimes they've used voice synthesis. So in a way what we're doing is sort of crashing our messier, kind of analog style with this more high-tech concept of what they do.

We gave them the texts of these novels that we've become so familiar with through our other work, so they used that. So our material is sort of the beginning and the end of this piece. They start with our material and then we use our actors as these sort of beautifully imperfect output devices. So rather than these sort of perfect, technological representations of what the computer has done, it gets processed through these actors who are running around in real time and space trying to keep up with what the computer is giving them to do.

In a way, it highlights these things that we really do love about our own shows. There's a kind of awkwardness to it, a sort of engagement with real time and real physical space. And a kind of attempt to do something that on some level is kind of impossible. We like taking on the whole text of these novels even though it's a kind of absurd thing to attempt in a theatrical context. It's another way of bringing something that is in some ways not theatrical into a kind of theatrical context. So in that way it is conceptually related to things we've done.