Patrick Barr has been hawking his original photography around New York City's streets for decades, and around ten years ago, he came up with a DIY golf game to pass the time while selling his prints. Barr's spin on golf, which uses recycled milk cartons as golf balls, can be played anywhere—so long as too many cars or pedestrians aren't passing by.

In time, Barr became known as "Tiger Hood," bringing his roving golf games to alleyways around town, where he handed off the club to passerby, friends, regulars, and sometimes celebrities, too. "The first time I saw a guy taking my picture, he was behind me, and I was like, 'Why are you taking my picture?'" Barr tells Gothamist over the phone. "Because it didn’t strike me as anything interesting."

As Barr became more known for street golf, the reason he was out there at all—to sell his photography—became more obscured. When filmmaker Nicolas Heller met Barr three years ago on West 4th Street, he was enraptured with the photos he was selling, which chronicled people and ephemera from late '90s and early 2000s New York City. "What struck me about them is that I never saw anything like this before," Heller says. "Because nowadays everyone has a camera, whether it be on their phone or a digital camera. Back in the late 90s early 2000s...it’s very rare that you see some of the things he was able to capture." Heller bought several of Barr's photos that day, and the two became friends over the years.

Last year, Heller documented Barr's time as both a street golfer and a photographer in a short documentary, Neighborhood Gold Association, released yesterday. "Not only is he one of my favorite people in New York City, he’s kind of known for one thing," Heller says. "He’s a local legend for one thing, golf, but what people don’t know is that he is an incredible photographer. And he has this collection that people need to see."

This isn't the only documentary about Barr, either—it comes four years after Tiger Hood, which Christopher André Marks released in 2015, and is the first short about this beloved NYC character. You can watch that here:

Barr, who was born in Jamaica and lived throughout several boroughs of New York City as a child, had a nascent interest in photography that started in elementary school. He briefly took photos again in high school, when he was on the yearbook staff, but picked up the camera again when he had a stint living in Atlanta, Georgia, working for a truck driver moving people from state to state. "I just wanted to take pictures of the different states and show people where I’d been, and for myself, a record of where I’d been," he says. "I kept getting homesick for New York and kept coming back up here to take pictures."

His work ranges from unsuspecting shots of iconic buildings to a chance shot of a street clown performer getting arrested. On March 2nd, Barr's photos will be sold at an event at Project Farmhouse, in the East Village. The event will also include a screening of Neighborhood Golf Association. 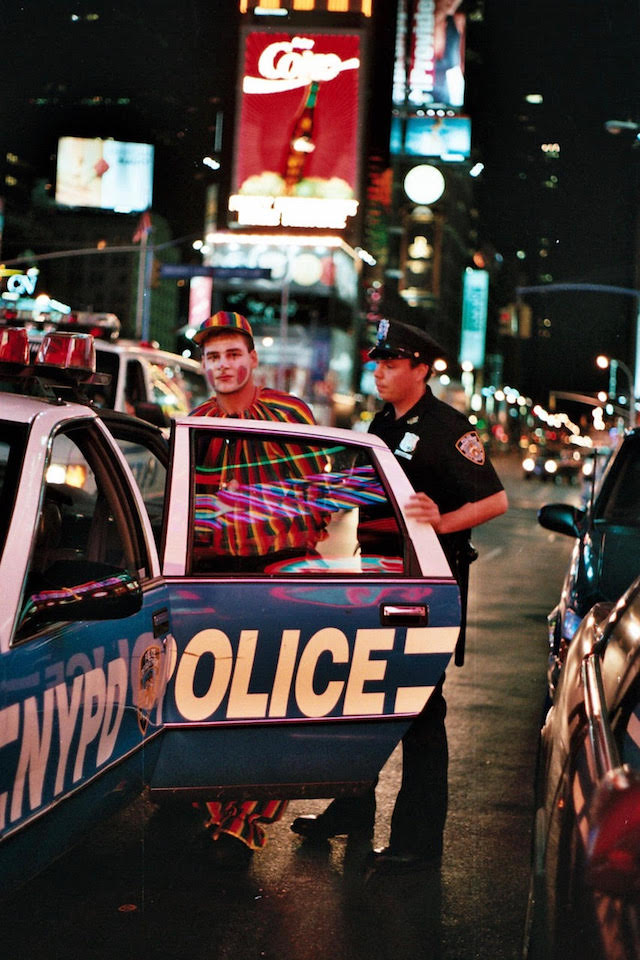 A clown street performer getting arrested. Photo by Patrick Barr.

"It’s something that anybody can do," Barr says. "I wanted it to be like street games 2.0. It’s not about me. It’s about the game."