Was The Best Girl Band Ever From... Queens?

In the not so distant past, while sitting in the chair of the person who cuts my hair, the Shangri-Las' "Out In The Streets" came blaring over the speakers, prompting me to purchase the song immediately so I could listen to it on my way home, over and over again. The song was released in 1964, and in the 1970s was covered by both the New York Dolls and Blondie... but the original is still the way to go. Just ask Ben Gibbard:

At this moment convinced 'Out In The Streets' by The Shangri-La's is the greatest song ever recorded,

"Not satisfied with just singing in the neighborhood, they started to play local record hops and dances, with Georgie Weiss [Mary and Betty's brother] nearby, keeping a watchful eye on them. The girls were brought to the attention of a producer around the nearby area named Artie Ripp... [who] would sign acts, record them and then sometimes shop the master tapes around to different labels." 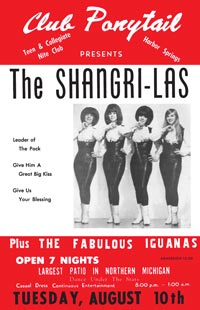 They soon met George "Shadow" Morton, who was "on the hunt for a group, and a bug was put in his ear about a group of girls from Queens who were performing on the local club circuit. He went down to see the Shangri-Las perform" and saw potential. He went on to write and produce "Remember (Walking in the Sand)" and "Leader of the Pack" for them—they hit it big with these songs when they were still just teenagers. "By the end of 1964 the group was an established act. They performed with the Beatles, toured with R&B artists such as The Drifters and James Brown." (You can read more about their origin story here.)

The Shangri-Las presented as pretty street-wise in comparison to the other more delicate and taffeta-clad girl groups of the time—there was even a rumor that the FBI had their eye on Mary, who may or may not have carried a firearm. In this A&E documentary they're referred to as "the tough sluts," who wore ripped stockings and chewed gum.

Though they weren't around for that long, they still earned a stamp of one of the more bad-ass, successful girl groups to date. The foursome (often a trio, as Betty didn't like to tour) split up around 1968, with an attempt at a comeback in the 1970s, and a final reunion show in 1989 in New Jersey. Eventually Mary became a purchasing agent in Manhattan, saying, "I went to work for an architectural firm, and I was seriously into it. Then I got into commercial interiors, huge projects, buildings." She left that in 2007 to get back into music, and has released one solo album since.

Remember (Walking in the Sand) (later covered by Aerosmith)

#girl band
#shangri-las
#the shangri-las
#original
Do you know the scoop? Comment below or Send us a Tip