In the series premiere of GIRLS, Hannah Horvath proclaims she is "the voice of my generation," or at least, "a voice, of a generation." It was a good first jab at starry-eyed unemployed millennials who dream of greatness while living on their parents' dime, but it was also sort of prophetic. Over the last six seasons, GIRLS—and, chiefly, creator Lena Dunham—has been repeatedly heralded for capturing millennials, despite some pretty loud protestations from millennials (like this one!) themselves. Here are a few entirely real headlines:

So is GIRLS the voice of a generation, or have we, the generation, turned GIRLS into our voice? If a Gen Xer or Baby Boomer writes a GIRLS thinkpiece, of whose voice does the piece refer? Can one privileged white urbanite encompass an entire generation?

As Gothamist's official Office Millennial, I was offered the opportunity to add to the internet's GIRLS #HotTake Pile as the end of the series was quickly approaching. It has been quite difficult, and halfway through my original pitch, "Growing Up With GIRLS," I gave up. I don't really like the show, but there are certainly some excellent, stand-out episodes (we'll go over those elsewhere); in my opinion, though, overall it lacks strong character development, the plots are slapdash, and while some of the writing is quite good, I haven't noticed a consistent voice tying it all together. Perhaps that was the plan, an unreliable narrator finding her voice while navigating post-college life?

Sex and the City, considered by some to be a GIRLS precursor, might be widely parodied, but it's also been celebrated for revolutionizing how women are depicted on television. And it can be relatable—to this day, I still marathon it every time someone dumps me. What has GIRLS done? In my millennial-tinted glasses, it's given my generation's critics more fodder for their essays on "Why Millennials Are The Worst?"

I am fiercely defensive of my generation, even when they do stupid crap like get $600 grey dye jobs or talk to the Times about how their parents are buying them apartments. To me, GIRLS pulled out the worst things about millennials—they're narcissistic, they rely on their parents' cash, they think they're special and great and worthy of adulation even if they haven't pulled themselves up by their own bootstraps. I've been hearing these complaints about my generation for years, and I'm tired of them.

Millennials have their foibles like any people lumped together into a group. Some earn what they get, and some don't get what they deserve. Some are annoying, selfish, and narcissistic. Some aren't, or maybe they are sometimes but not always. People in their 20s do and say stupid things, because they're just beginning to learn how to make their way in the Big Bad World.

When GIRLS first premiered in 2012, I was 22 and a recent college graduate. At the time I lived in Williamsburg; I freelanced and interned for local publications and I worked as a floor manager at a retail chain. My friends and I were really excited about GIRLS, a show that purported to capture our lives the way Sex and the City supposedly defined a generation of women ahead of us. Did it succeed? Possibly at times, and maybe part of my bitter view towards the show comes from when it reflects things I dislike in myself.

There were certainly these glimpses throughout GIRLS, vignettes that looked a lot like my life, but eventually I had friends who began describing my real life moments as being "So GIRLS!" and, no, to go to a party in Bushwick in 2012 was not "so GIRLS," it was just something some people did sometimes. And now there are parts of, say, The Office and 30 Rock that look like my life. Hell, I can even identify with some episodes of, like, Breaking Bad and Keeping Up With The Kardashians—you can find yourself in anything if you look hard enough.

So by season 2 I got tired of GIRLS, because it was impossible to separate this kind of noise that had built up around it. But I kept watching, for work mostly, and more recently I've spent ten weeks every year with it for recapping purposes—thinking semi-critically about each episode had not made it more palatable to me, however. Then again, don't the most self-hating of us hate what most reminds us of ourselves? 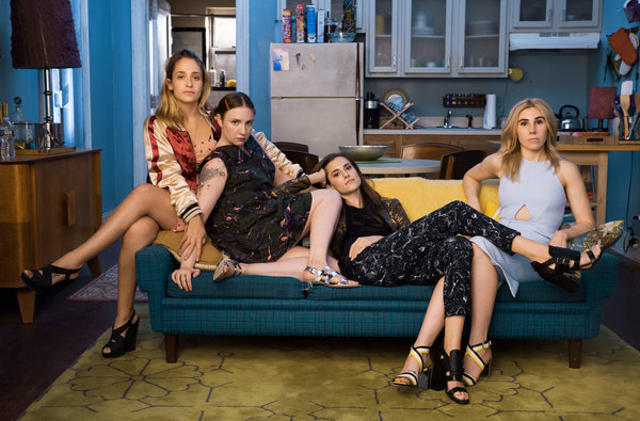 In The New Yorker this week, Jia Tolentino describes bingeing GIRLS for the first time recently. She points out that the show's foible is that it's not supposed to be realistic—the characters operate in a world that's been created for them, and their narcissism and all-around awfulness doesn't demand "identification as much as satirizes it." You're not supposed to see GIRLS as a direct reflection. GIRLS is not real life. GIRLS is a fictional show in a fictional universe. We are not GIRLS.

I get that, but if I can't watch GIRLS without wanting to kick over my computer, yet still unspool posts that some of my more vicious Internet haters describe as "more like diary entries," that means GIRLS is me, doesn't it. The seasons weave together in my head, but there were some episodes that were so relatable they were unnerving. There are moments in which Marnie or Hannah does something terrible or says something dismissive or makes a situation all about her, in which I cringe not because the character is awful, but because I'm awful, and I have probably done or said or commandeered just as the character did. The very fact that I'm making this end-of-show post a piece on self-reflection is not lost on me.

I may dislike GIRLS now, but in 10 years I'll rewatch it and remember a time in which I was young and stupid, and published my rambling thoughts on the Internet, and cried in the shower, and loved the wrong people. I will remember spending my time only thinking about myself, my sadness and my problems, and I will be grateful I'm not there anymore. I will also miss it, probably. It may even seem, with that kind of distance, like it was, briefly, a voice of my generation.

Or maybe it will always hit too close to home. My mom never liked Sex and the City, even though she watched it when she, like the show's characters, was in her 30s and 40s. She did like The Mary Tyler Moore Show, which, like SATC for me, depicted female friendship a generation or two ahead of her. Maybe this is how it works. Maybe it's too hard to watch yourself become fictionalized and satirized and pulled apart. And no matter what, GIRLS will forever exist as a capsule, bottling a certain time, place and group of people for future generations to scoff at or idolize, no matter how fictional or real they were.

I'm tired of talking, writing and reading about GIRLS, and after this weekend I won't have to [ed. note: never say never!]. But if you yearn for endless GIRLS content, fear not: Vulture's been on a tear all week.

#girls
#girls recaps
#millennials
#original
Do you know the scoop? Comment below or Send us a Tip