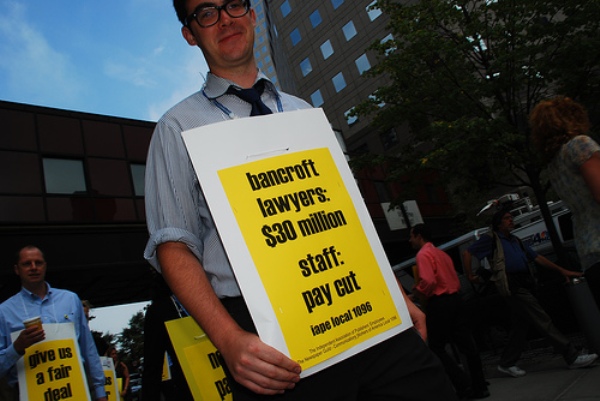 Now that Rupert Murdoch is on his way to owning the Wall Street Journal, not only does he get to enjoy owning the successful and admired newspapers, he gets to feel the brunt of its personnel headaches too! The NY Times reports that signs from contract-less employees, including the phrase "Show Me The Money," have been plastered on WSJ office walls, only for someone to tear them down...and for someone else to put them back up and on and on again.

The signs were (posted and taken down and) posted when Murdoch visited the offices for the first time last week, and today, many WSJ staffers want a better deal from the new boss. FishbowlNY has the official protest memo from the Independent Association of Publishers' Employees. Here's an excerpt:

Reporters have been working without a contract since the end of January. They are increasingly angry because, at a time when Dow Jones is offering multi-million dollar pay packages and "golden parachutes" to executives, not to mention the $32 million 2007 pay package recently announced for Rupert Murdoch himself, Dow Jones is trying to more than double health premiums and hold down salaries in a way that will cut the real, inflation-adjusted take-home pay of many Dow Jones employees. It would cost Dow Jones roughly $5 million - over four years - to make employees whole, but for some reason it views that sum as too high.