"The moon is seen during a lunar eclipse on October 27, 2004 over a Manhattan skyscraper in New York City," via LIFE 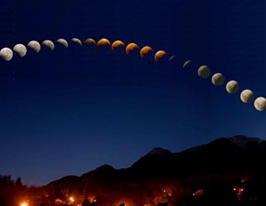 Set your alarms for a lot earlier tomorrow morning, at 1:15 a.m. on Tuesday there will be a lunar eclipse visible from New York City that will last around 3 hours (experts say you'll get the best view just before 3 a.m., when it reaches totality). While the moon won't go black, it will turn what some are calling "blood red"; according to the NY Post, "with recent volcanic eruptions around the globe dumping tons of dust into the atmosphere, scientists predict the moon [will be] glowing an eerie red instead of the usual orange-yellow tinge."

A NASA rep says "It's perfectly placed so that all of North America can see it," and here in New York we should be able to view it just fine, even if it is a little cloudy. An eclipse hasn't fallen on the winter solstice since 1638, and won't happen again until 2094. NASA will be streaming live video of the event if you don't want to go outside, though we suggest you do, and send us your photos (or tag them "Gothamist" on Flickr).